Operational action for the Aiguillon Bay

The Aiguillon Bay, located on the border of the Vendée and Charente-Maritime departments, is the outlet for the 600,000 ha of the Marais Poitevin catchment area. The current morphology of the bay is the result of dykes that have been successively built in the marshes over the centuries. Soil and marine influences induce and condition the more important environments found in the Aiguillon Bay, including salt marshes (1,100 ha) and mudflats (3,700 ha). 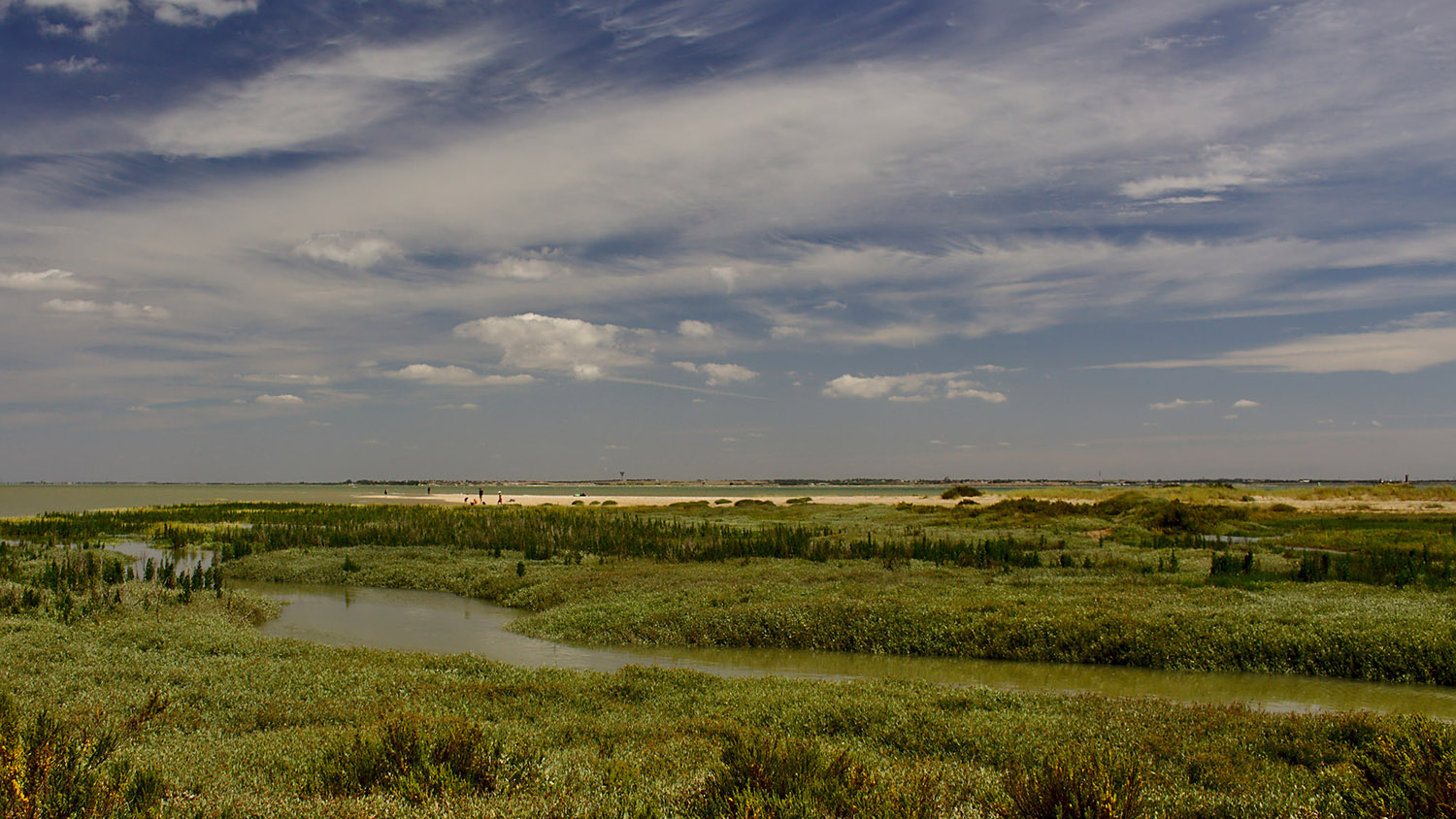 The Aiguillon Bay, the outlet for the 600,000 ha of the Marais Poitevin catchment area

A site used by an important number of migratory birds

An area of economic importance

for shellfish farming and fishing due to its position at the interface between land and sea.

drain into the bay and directly condition water quality.

AN AREA OF HIGH PRIMARY PRODUCTION USEFUL TO BIRDS AND HUMANS

The Aiguillon Bay’s classification as a National Nature Reserve is due to its exceptional ornithological interest. Indeed, the French coast represents an important area on the East Atlantic migration route, and the Aiguillon Bay is a site of primary importance for waterbirds, this is a direct reflection of a rich, quality environment. Birds are undisturbed and find food. Thus, this site of international importance is used by large populations of waders and anatidae for wintering or as a stopover on migration.

Shellfish farming, especially mussel farming, is a traditional activity in the Aiguillon bay. It is practiced in particular on stakes, called locally “bouchots”. However, due to a gradual natural silting-up of the bay this activity tended to decline in the area during the 20th century. This phenomenon was accentuated in particular by the “bouchots” constituting sediment traps, and also by the abandonment of the most upstream concessions: firstly that related to “bouchots” (where mortality was the most important during the Mytilicola crisis in the 1960s) and then the oyster farming that replaced mussel farming in these areas.

These abandoned “bouchot” stakes and oyster tables serve as supports for the development of deposits of wild Pacific oyster Crassostrea gigas with a total weight estimated at 3,400 tons (IFREMER, 2012), spread over an area of about 240 ha, covering the mudflats naturally present in these areas. 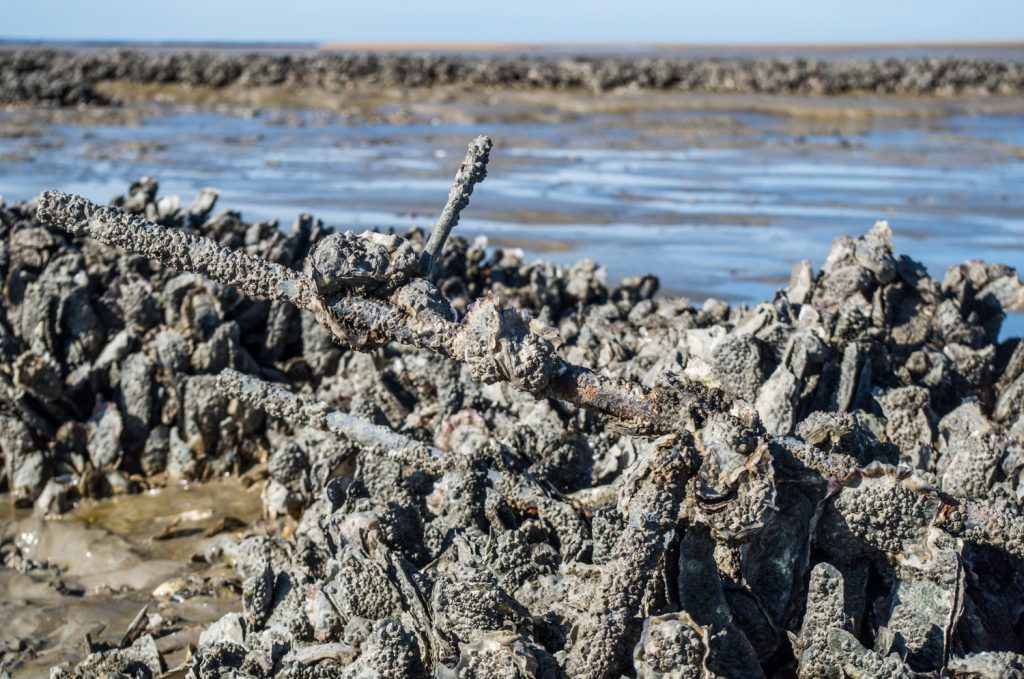 The objective of an intervention programme is therefore to experiment over 3 years with a methodology to test the removal of these piles of oysters and abandoned shellfish structures, in consultation with the shell-fishing profession, in order to return to the natural habitat of mudflats. This objective is part of the management plan of the Aiguillon Bay National Nature Reserve.

The aim is to restore at least 140 hectares of mudflats.

The areas of action included in the project are located on the Pointe de l’Aiguillon, around the Canal de Luçon and on the Charron mudflats.

The difficulties of accessing the mudflats, the age of the concessions and the lack of mapping require a strong investment of time before any work can be started. A preliminary inventory of benthic fauna is also required, as is the completion of the regulatory instructions for the proposed work.

At the end of the works, an assessment of the impact of the work, particularly in the area of sedimentation, will be carried out. 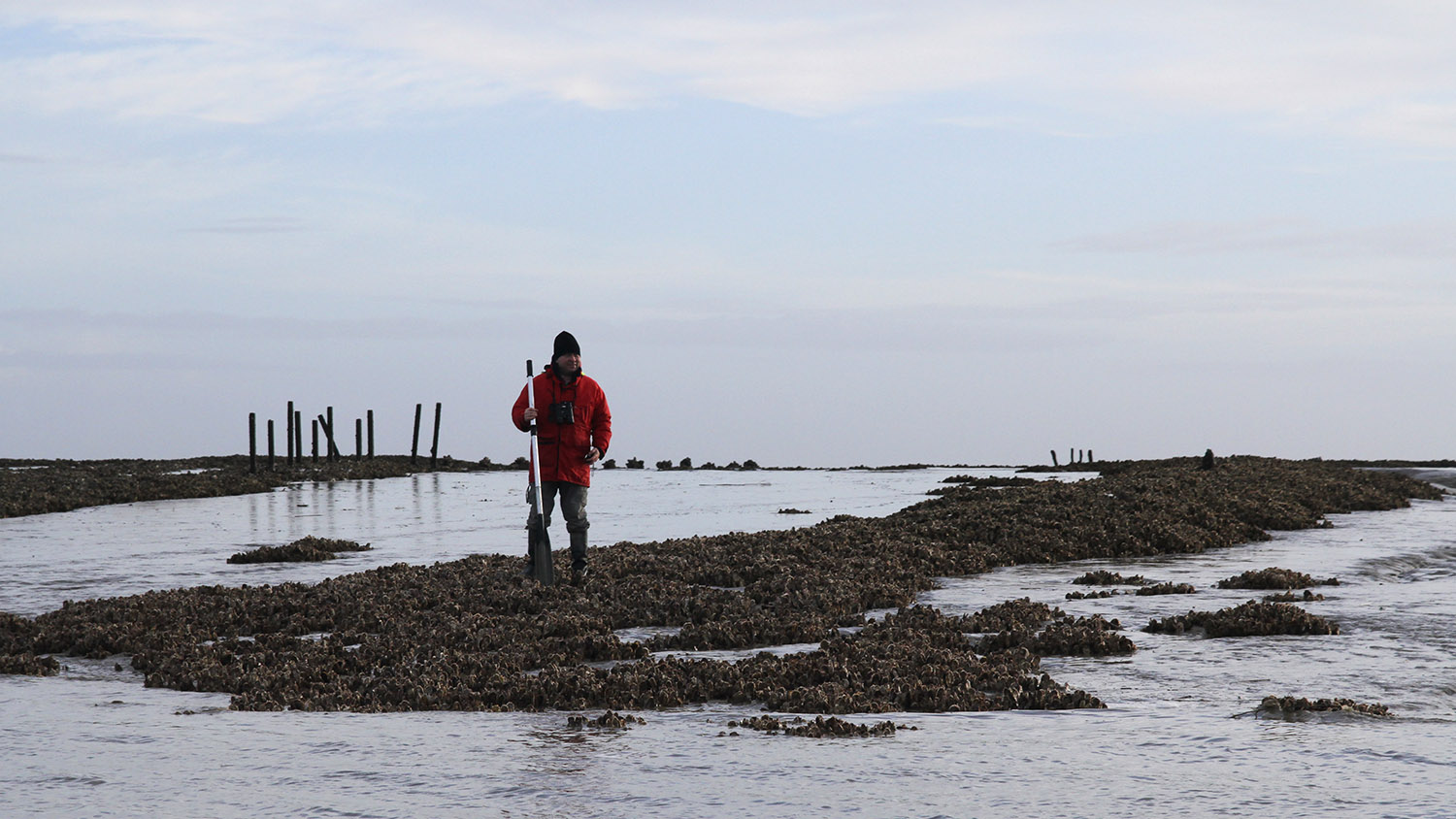 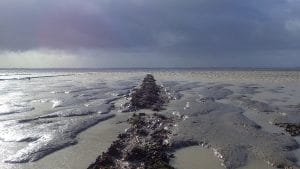 A SYMPOSIUM FOR THE RESTITUTUION OF RESULTS

A symposium on the theme “Restoration of coastal environmental functions in a shellfish farming area” took place on 28th and 29th October 2020.

These two days of meetings and exchanges allowed:

All the presentations were filmed and are available on the dedicated page. 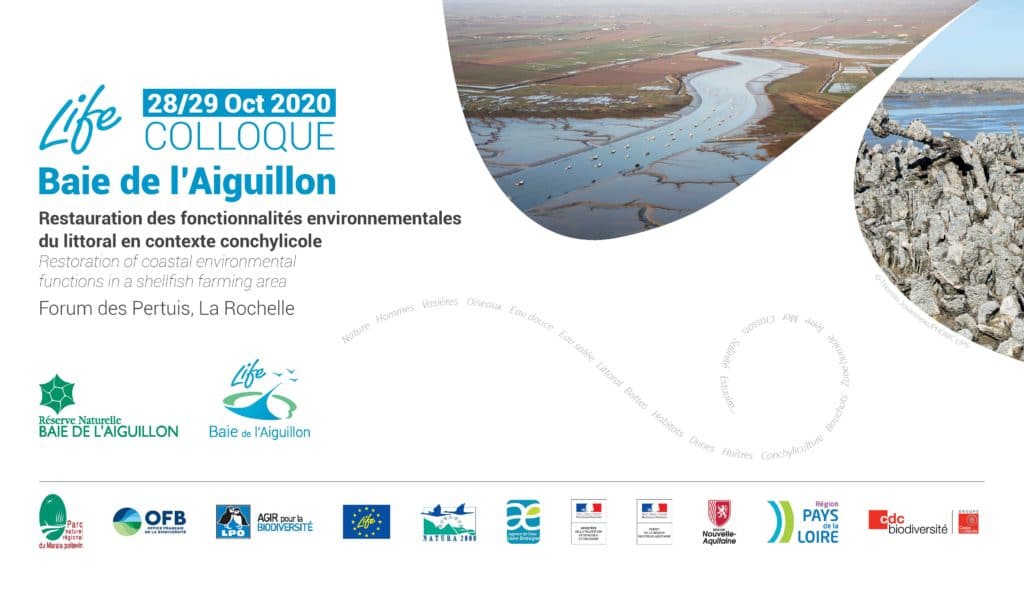 An inventory of benthic fauna, sediment particle size analyses and measurements of organic matter prior to experiments with “crassat” removals were carried out. Jérôme Jourde, a specialist in the taxonomy of marine macro-invertebrates was in charge of this study. Jérôme Jourde’s report is available for downloading on this site, in the “Studies” section. The same inventory and analyses of sediments have been carried out during spring 2021 and will soon be analysed.

More information can be found in the news section and biological monitoring page..

The company Opsia carried out a study of the Aiguillon Bay’s topography. A digital field model was produced. This public data is available on request from the Marais Poitevin Natural Regional Park.

A second topographical survey was done in autumn 2021 to evaluate the influence of the works on sedimentation. The results are available in the following report : Etude des évolutions géomorphologiques de la baie de l’Aiguillon.

The company selected to carry out the mudflat restoration work is SAS CTAT. Two amphibious machines, which can move in water and on mud, were designed for the work.

Three phases of work took place. In total, 158 work tides allowed to restore 118 hectares of mudflats. 34 tonnes of tables and scrap metal were recycled, and 42,000 m3 of crushed oyster shells 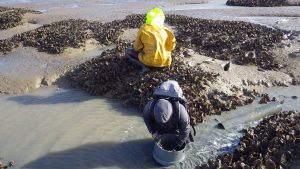 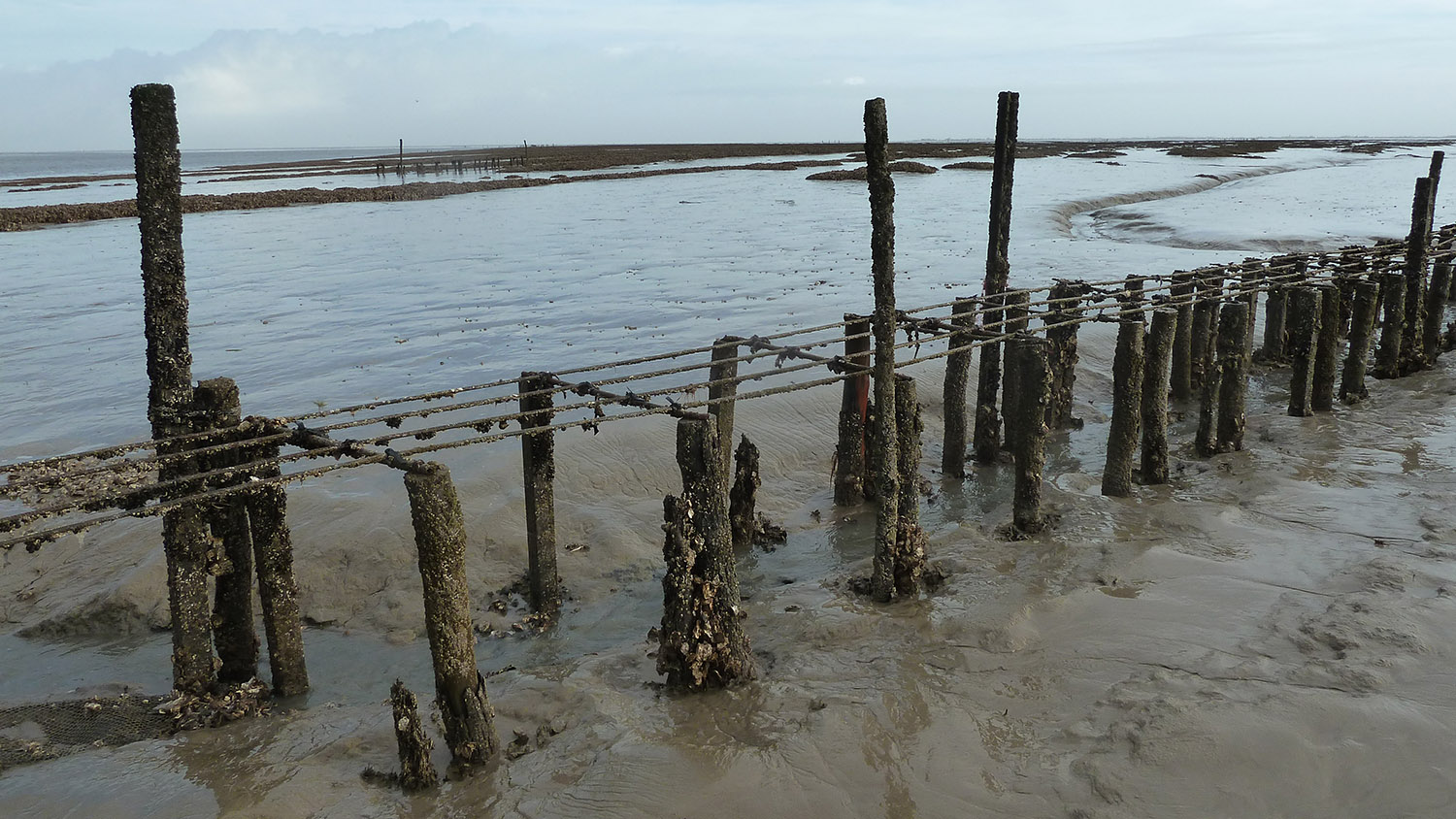 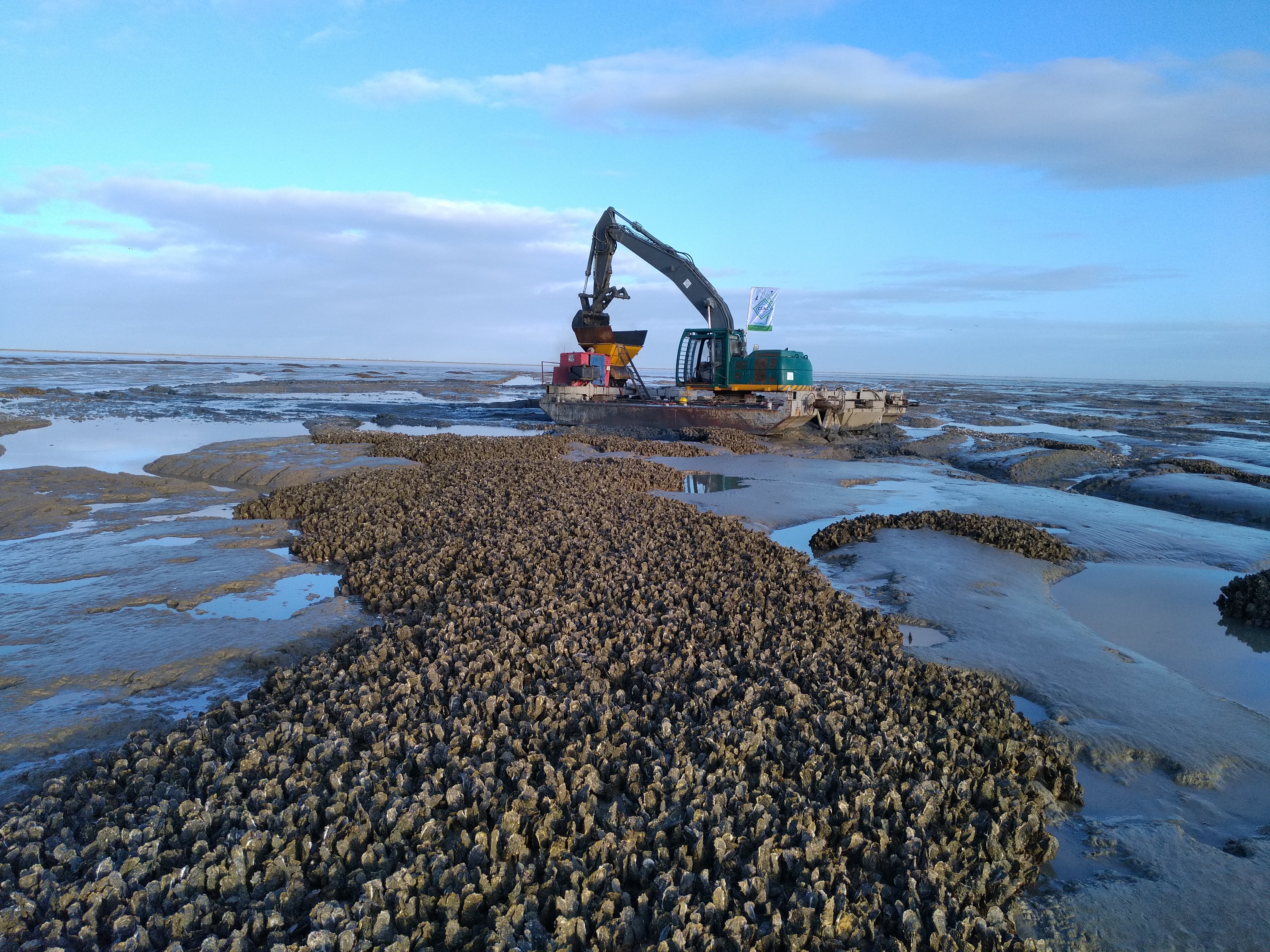 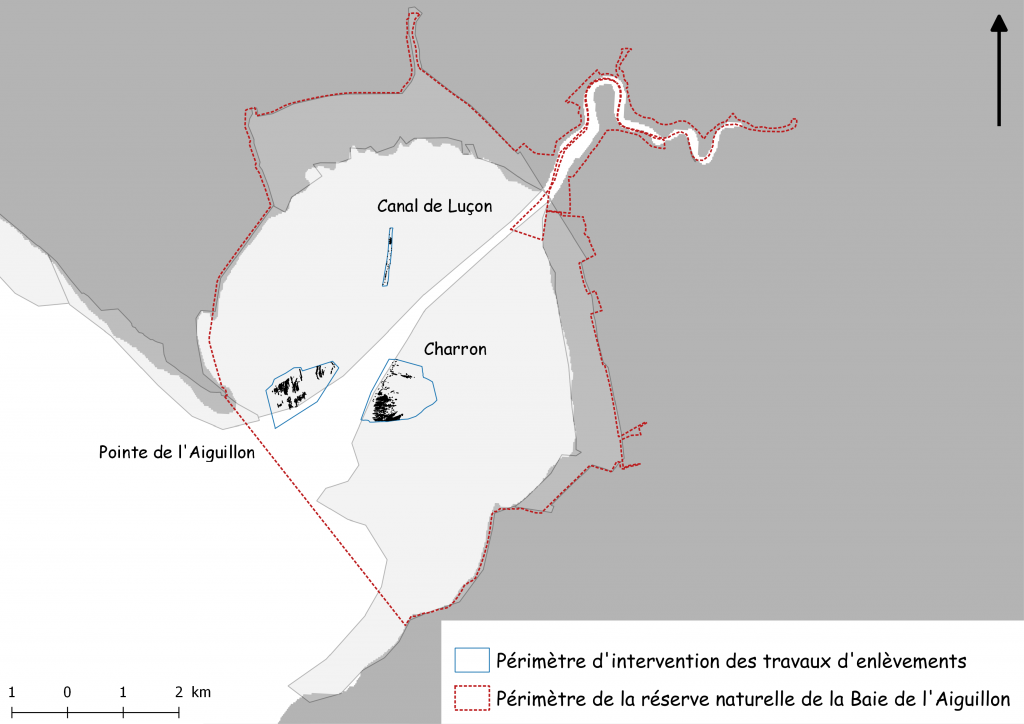 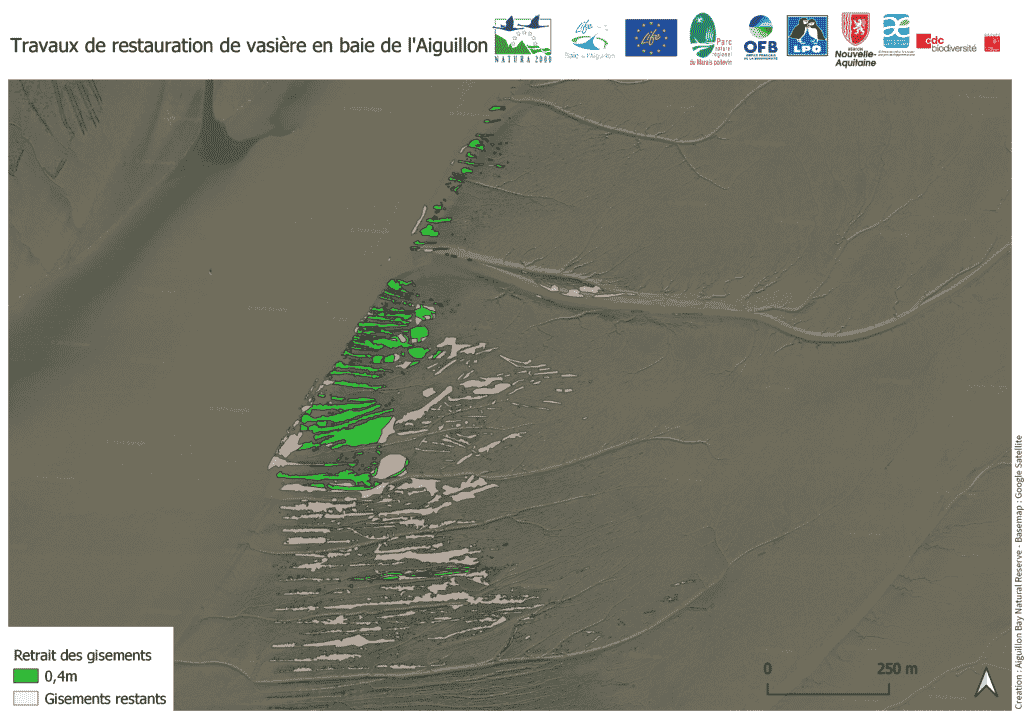 Removal of oyster deposits on the mudflats of Charron. 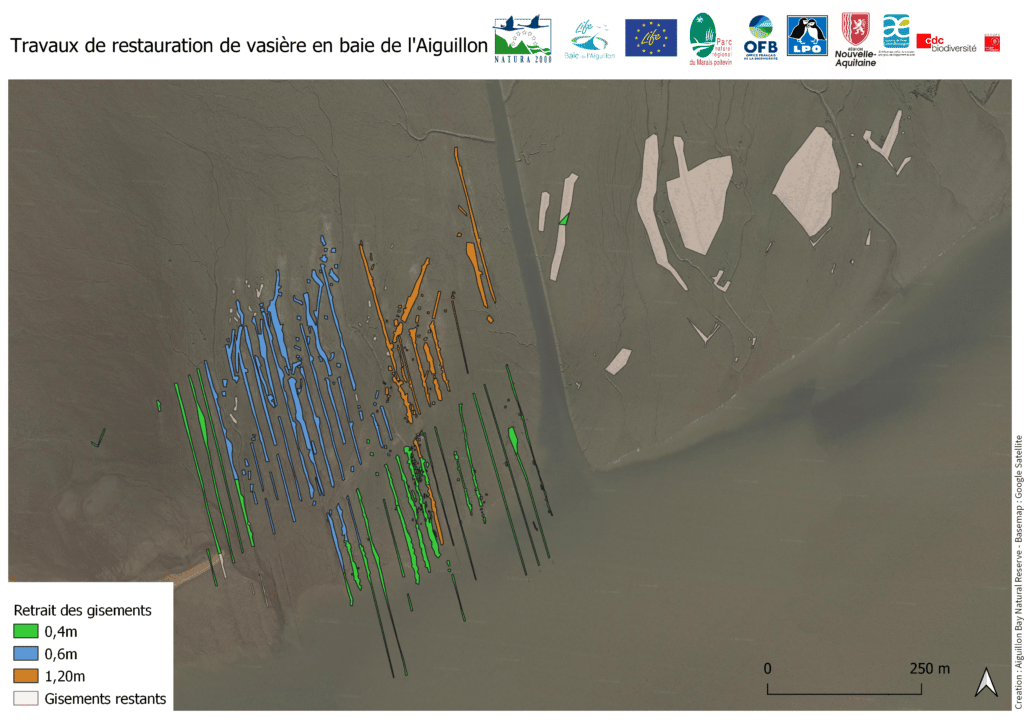 Removal of oyster deposits on the mudflats of the Pointe de l’Aiguillon.