Study of the use of the Aiguillon Bay and peripheral marshes by wintering wildfowl.

REASON FOR SUCH A STUDY?

The Aiguillon Bay and the Marais Poitevin are essential areas for many migrant and wintering wildfowl. In the 1980s, this eco-complex held more than 80,000 dabbling ducks. Due to agricultural changes in the marsh (reduction of area of grassland and modified hydraulic management), this number is currently around 20,000 birds. All the main loafing areas are classified as nature reserves, but not all feeding areas are strongly protected. On the face of it, the main loafing areas are included within the perimeter of the Natura 2000 zone. Contracts concerning agro-environmental measures (AEMs) are offered to farmers to maintain grassland habitats.

For this reason, it is important to create or improve loafing areas on the edge of the bay, areas located outside the perimeter of the National Nature Reserve. Given the complexity of agricultural and hydraulic policies in the Marais Poitevin, it seems essential to target the areas for action on both the terrestrial and the coastal parts.

But, beyond this work, one of the conservation challenges of this cortege of waterfowl species is to have a better understanding of the links between the feeding areas and the loafing areas, and thus better understand the functional space for these ducks. The work carried out will therefore have an operational character in order that management of the Marais Poitevin is adapted to ensuring that the wetlands are favourable for waterfowl. The corridors that accompany this work will thus help in the implementation of public protection policies.

The work carried out under the LIFE Baie de l'Aiguillon project concerns only food resources and related habitats. So three questions predominate: where do wildfowl loafing in the bay go to feed, what do they eat and what evolution is there of food resources?

Flight of wildfowl over the nature reserve © BEQUARD

WHAT SHOULD BE DONE?

1 - First question: which areas produce the most food?

The aim is to characterize and quantify the main trophic resources for granivorous wildfowl through the analysis of seeds contained in soil core samples. These analyses allow us to qualify and quantify the main seeds consumed by the wildfowl. They also identify the potential of the site from surface samples taken throughout the season (in the autumn, before the arrival of the wintering birds; in winter, while they are presence; in the spring, at the end of the season).

Seed analysis is then done by sifting the core samples. Each seed is identified and counted. The total seed weight of each core sample is noted (fresh and dry weights).

2 - Second question: what do the ducks eat?

In cooperation with local hunters practicing two different hunting methods (“la passée” – as birds fly by in the early morning or evening, or “à la tonne” - from a sort of blind), crops of shot ducks will be analysed. This in order to discover what ducks eat during the winter.

This analysis concerns only wintering ducks killed during hunting in December and January, preferably during the “passée”. Each gizzard and crop was placed in a freezer bag. A label made by reserve staff is given to voluntary hunters.

3 – Third question: where do they go to feed?

This study requires the capture of Mallard and Teal. The choice of species was made to equip ducks considered to be granivorous. These ducks are equipped with GPS-type emitters in order to specify the location of feeding areas and the movement of ducks during the night.

The results will therefore provide information in order to:

At first, it is easier to catch these birds at Prée Mizottière. Nevertheless, experiment captures on the bay (more random) were tested during the 2017-2018 winter resulting in the Champagné-les-Marais salt marshes being retained as a capture site.

This action therefore integrates "capture and ringing", equipping birds with transmitters and geo-locality analysis of the data. It is therefore a question of recovering the precise GPS location of the ducks to identify their feeding area (and their associated management).

Due to it being specifically focused on ducks, this programme phase will be integrated into the "Teal" programme of the OFB (The French Biodiversity Agency).

Ducks were caught at the Prée Mizottière, l’Epine, the Le Petit-Rocher sites as well as on the Champagné-les-Marais salt marshes, using cage traps. Catching operations at the Pointe d'Arçay took place during the 2018-2019 winter. Grain was distributed in traps to optimize their efficiency.

The cage traps are deployed every day from mid-November to mid-January (NB: given the training constraints, they were only in use from the beginning of December in 2017); all captured ducks are ringed. Teal are equipped with nasal markings. This additional system facilitates the implementation of the LIFE programme as all the necessary authorizations and technicalities have been validated by the Natural History Museum at the OFB. All training related to ringing and the installation of transmitters will be done in this context.

1 – First question: which are the areas that produce the most food?

To answer this first question, nearly 12,150 core samples were taken from all the sites during the 3 years of sampling (salt marsh grass areas of Charron and Champagné-les-Marais, meadows of the Prée Mizottière and the Vacherie and Lairoux common marshes). All the core samples were sieved, and the seeds placed in an oven (4 days at 60 ° C) before the analysis phase: identification, counting and weighing. 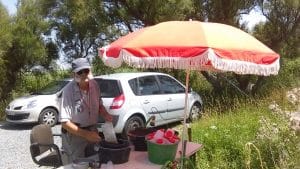 2 – Second question: what do the ducks eat?

To answer this question, 69, 25 and 56 gizzards/crops (first, second and third years respectively) of different species of granivorous anatidae were analyzed: Mallard, Teal, Wigeon, Pintail and Shoveler. 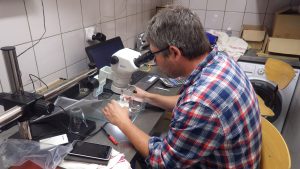 Sorting and analysis of the first Mallard gizzards

3 – Third question: where do they go to feed?

Birds were captured at Prée Mizottière, L’Epine, Le Petit Rocher and the Pointe d'Arçay (one year only) sites and on the salt marsh meadows of the reserve using several “matoles” (small traps with decoys) and one or two large cage traps.

Data on duck movements are being analyzed. 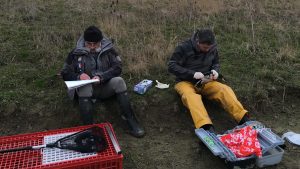 Ringing and placing a transmitter on a Mallard