Implementation of water quality monitoring in the Aiguillon Bay

At the continent-ocean interface, the Aiguillon Bay receives important inputs of nutrients and organic matter from the land, and exchanges large amounts of material and energy with the ocean. This coastal zone receives in particular the fresh waters of nearly 6350 km2 of watershed from four departments: Charente-Maritime, Deux-Sèvres, Vendée, and a part of the Vienne.

These inputs from the land, more or less regular in quantity and makeup, are one of the key factors in the functioning of the ecosystem, partially controlling the primary production of the bay.

There was only one sampling point managed by the National Institute for Ocean Science (IFREMER) under the Water Framework Directive (DCE) with a minimum time gap of fifteen days at the time of high tide (+ /- two hours) and located on the Sèvre Niortaise river (measurements of salinity, temperature, nutrients, Chlorophyll a). This device therefore did not allow for the potential input of fresh water into the bay to be taken into account. Also, the terrestrial inputs of the various watersheds that flow into the Aiguillon Bay, in particular that of the Lay (via the Raque canals and the Chenal Vieux), the Curé (via the Curé canal) and the Vendée (via the Luçon) are not studied for the moment.

The inputs from the marine environment and under the influence of the large regional rivers also contribute to the bay influencing in a more general way the functioning of the “Pertuis charentais”. Continuous salinity measurements within this coastal zone make it possible, for example, to account for the heterogeneity of the water masses influenced by these different sources of fresh and marine water. Fluctuations in these inputs have therefore become a concern in terms of management, preservation of the environment and its use, particularly by fishing and shellfish farming professionals.

Aware of the usefulness of a better scientific knowledge on the functioning of these coastal water bodies and of the inadequacy of the current means at their disposal to move towards this objective, the managers of the reserve requested that the National Institute for Ocean Science (IFREMER), a reference body in terms of monitoring and observation of coastal waters, help them set up an adapted scientific study and assistance in planning the management work.

A NOT SO SIMPLE MONITORING...

The measurement of water quality is complex taking into account a multitude of parameters or molecules. Temperature and salinity of the water are major physico-chemical characteristics that are simple to measure to facilitate the understanding of the heterogeneity of the water bodies studied and influenced by the different sources.

Despite the existence of a number of regional and national networks set up by the various services concerned (State, Departmental Councils, National Institute for Ocean Science), freshwater supplies, particularly from a qualitative but also quantitative point of view (massive and unpredictable inputs during periods of flooding, for example) can only be fully understood by the existence of high resolution spatial and temporal monitoring (note that in parallel with this study financed by LIFE, a study on the volumes of water brought to the Aiguillon Bay is carried out by the Marais Poitevin Public Company). 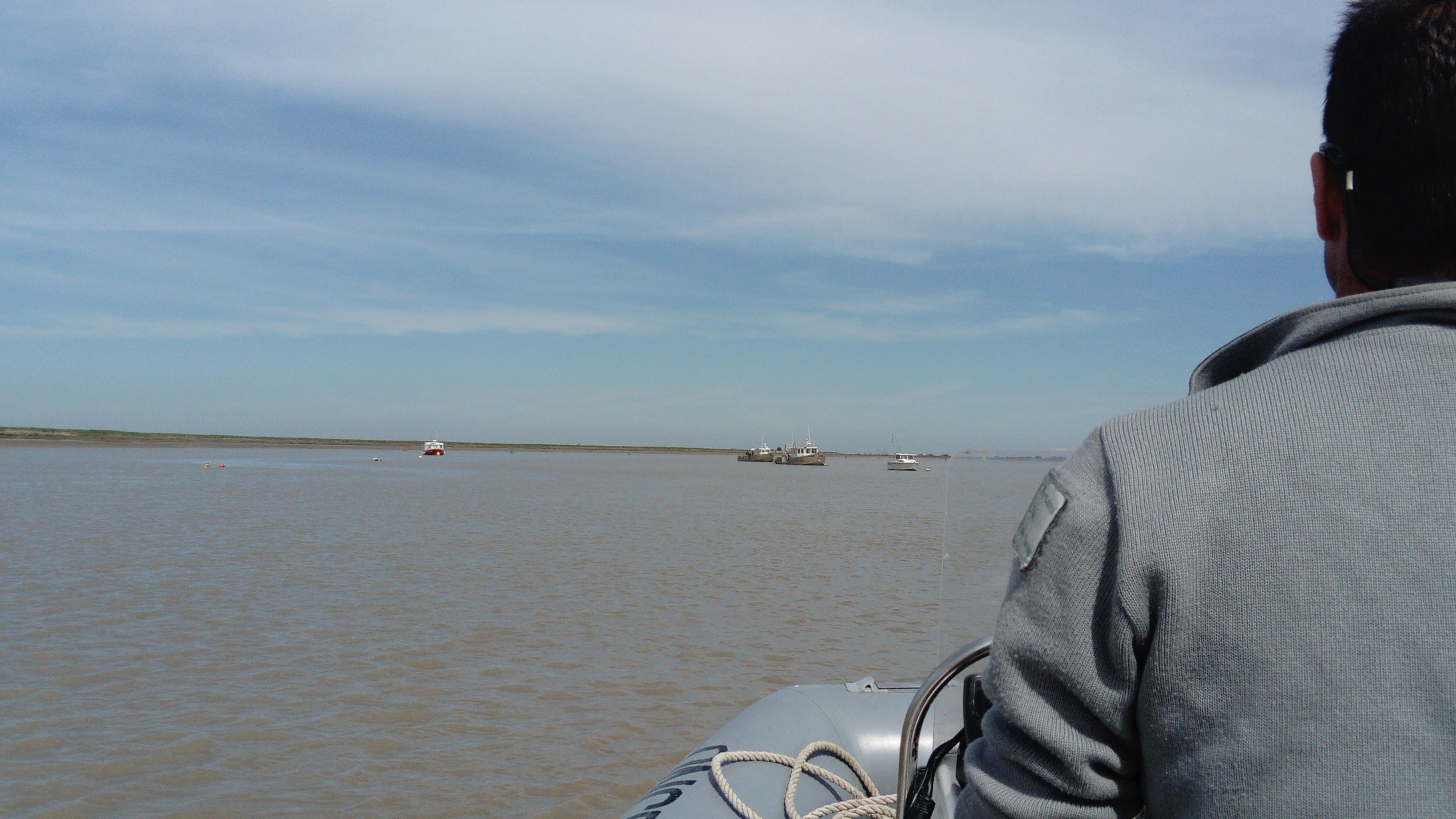 Within the framework of LIFE, it is proposed to:

1 – guarantee the continuous long term presence of three measuring points using multi-parameter probes (temperature, salinity, turbidity, chlorophyll) in the bay (Sèvre and Lay buoys) and the Pertuis breton. The maintenance of these probes is currently no longer funded, thus not allowing the keeping of these measurement tools, which is nevertheless essential.

2 – Install additional probes for measuring temperature and salinity at the Chenal Vieux, the Canal de Lucon, the Canal de la Raque and the Canal du Curé. These tools installed at the catchment area level will make it possible to measure the variations of these water bodies in terms of temperature and salinity likely to provide elements as to the distribution of certain species of fish and birds and also as to the influence of these terrestrial inputs on the bay.

In general, it is proposed that an agreement be made between the management of the Aiguillon Bay Reserve and the National Institute for Ocean Science.

The National Institute for Ocean Science (IFREMER) will use its expertise in the choice of equipment, the validation of the system, and the associated metrology and will validate the technical implementation of complementary probes for temperature /salinity measurements; the reserve will contribute in the long term to the operation of the measuring stations and the collection of data (training required). The two bodies, within their respective areas of competence, will analyse and publish the results issuing from these measurements.

Thus, at the end of the LIFE project, a valid water quality observatory (physico-chemical parameters mentioned above) will be set up. It will provide a better understanding of the spatio-temporal heterogeneity of the water bodies of the catchment area and its possible influence on the functioning of the Aiguillon Bay.

In addition to these continuous physico-chemical measurements, punctual measurements (water sampling from a boat at least every fortnight) of certain hydrological parameters (particulate matter, dissolved mineral and organic nutrients and parameters of the carbonate system) at the five main outlets of the catchment area and the three coastal points described above will be carried out in order to study their spatio-temporal dynamics and to quantify these inputs into the bay by flow measurements taken simultaneously.

These more or less regular inputs from the land in quantitative and qualitative terms are one of the key factors in the functioning of the ecosystem, partially controlling the primary production of the bay. The latter then conditions the upper echelons of the food chain and will influence the distribution and abundance of plant and animal species.

The realization of such an operation will allow for a better understanding of the dynamics of nutrients and carbon in the water that come from the different catchment areas as well as the qualitative and quantitative terrestrial inputs into the Aiguillon Bay likely to influence its functioning.

This operation will possibly help in administrating public policies concerning upstream areas. In addition, given the impact of water management on many economic activities (shellfish farming, inshore fishing), this action will certainly provide for more contact between professional people of the area and the reserve. Finally, due to a possible synergy of action and the installation of complementary tools (flow meters) it will provide for taking better account of the freshwater needs of the maritime part of the Poitevin marshes and therefore of improving their management. 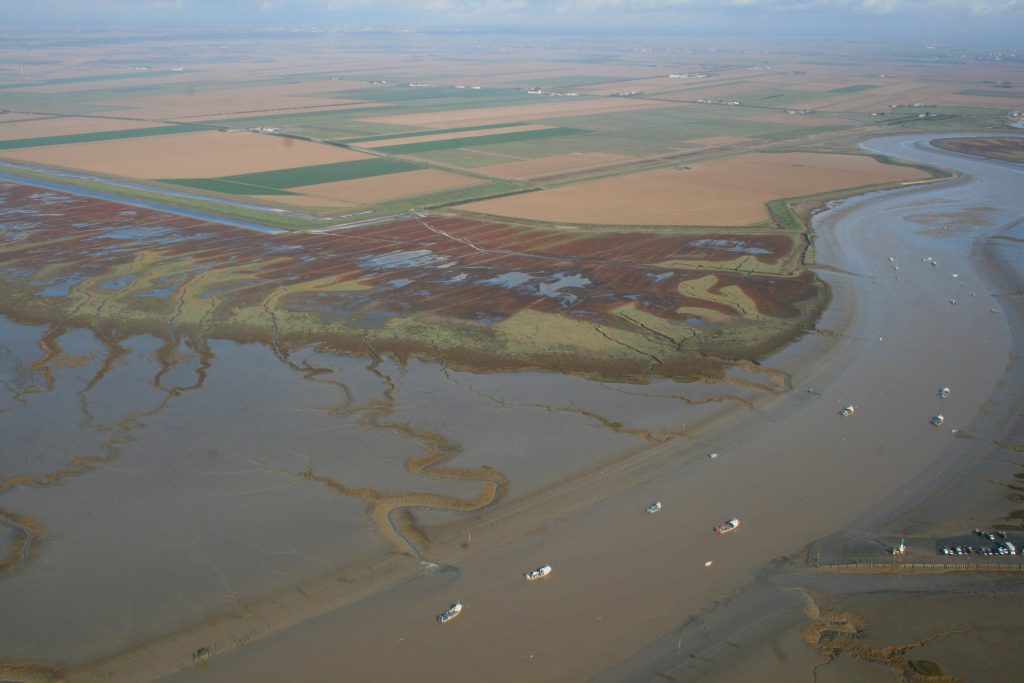 STATE OF PROGRESS AND RESULTS

Monitoring the temperature and salinity in the channels, outlets and downstream of rivers.

The STPS probes (NKE production) have all been operational since January 2017. They have allowed for continuous measurements of temperature, salinity and pressure at the Chenal Vieux, the Canal de Luçon, the Canal du Curé, the Niort Sèvre and the Lay. An initial probe was lost to sea following the passage of storm ZEUS, 6th March 2017. The probes on the Chenal Vieux, Canal de Luçon and Canal du Curé were removed in October 2020. 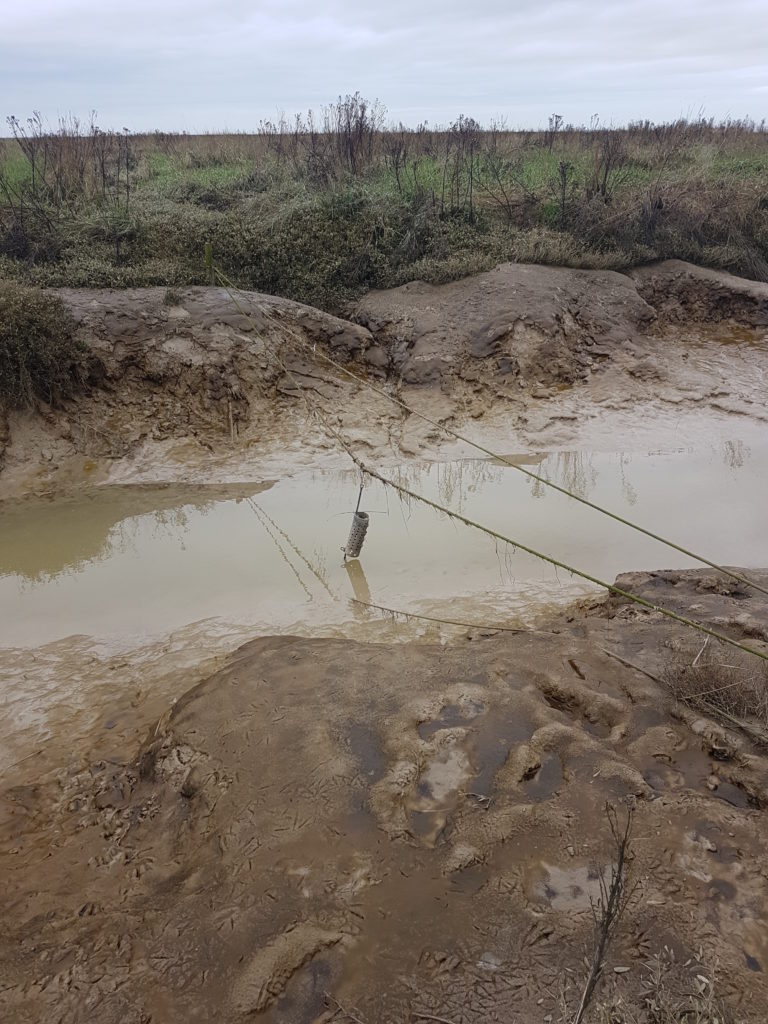 STPS probe in operation on the Canal du Curé

Concerning salinity, there is also the same trend at the two stations. Salinity fluctuates widely at the beginning of the year, with occasional increases and then a gradual increase in salinity from mid-June until reaching an average salinity of 30g/L for the Lay and 34g/L for the Canal du Curé. 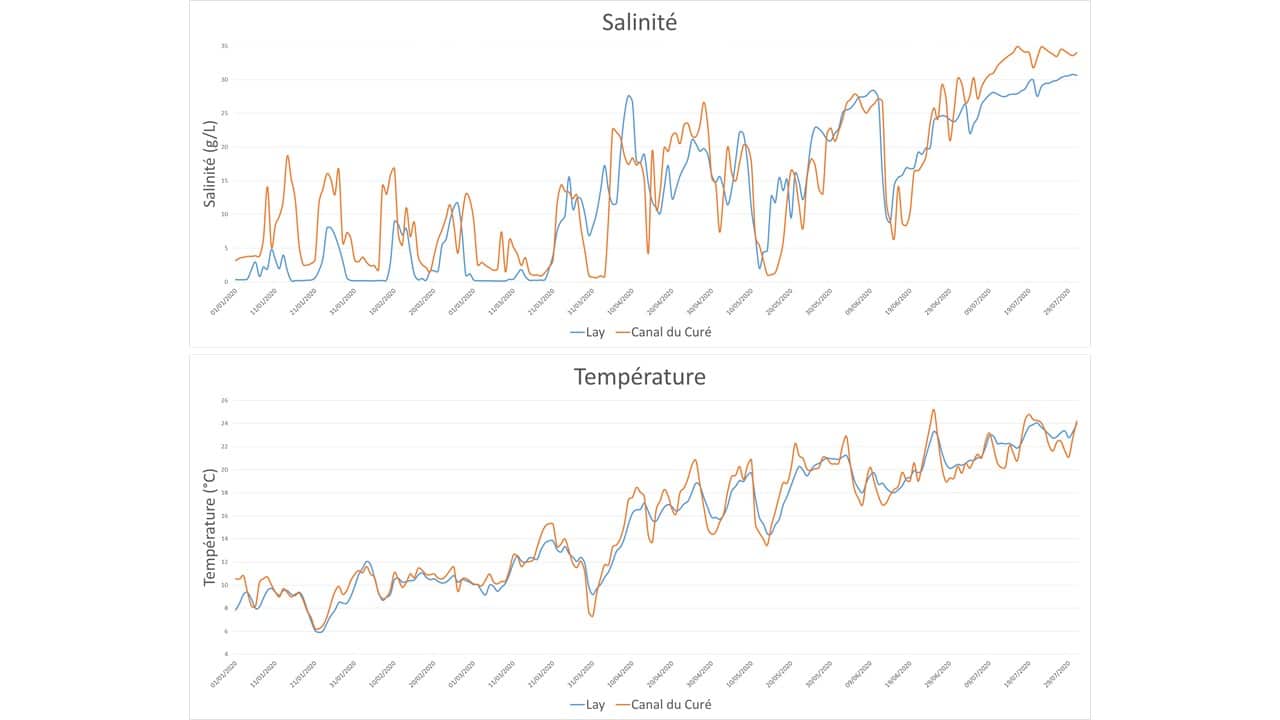 The salinity and temperature data of the different stations are regularly transmitted on the LIFE Baie de l'Aiguillon website and can be downloaded from the documents for downloading section. 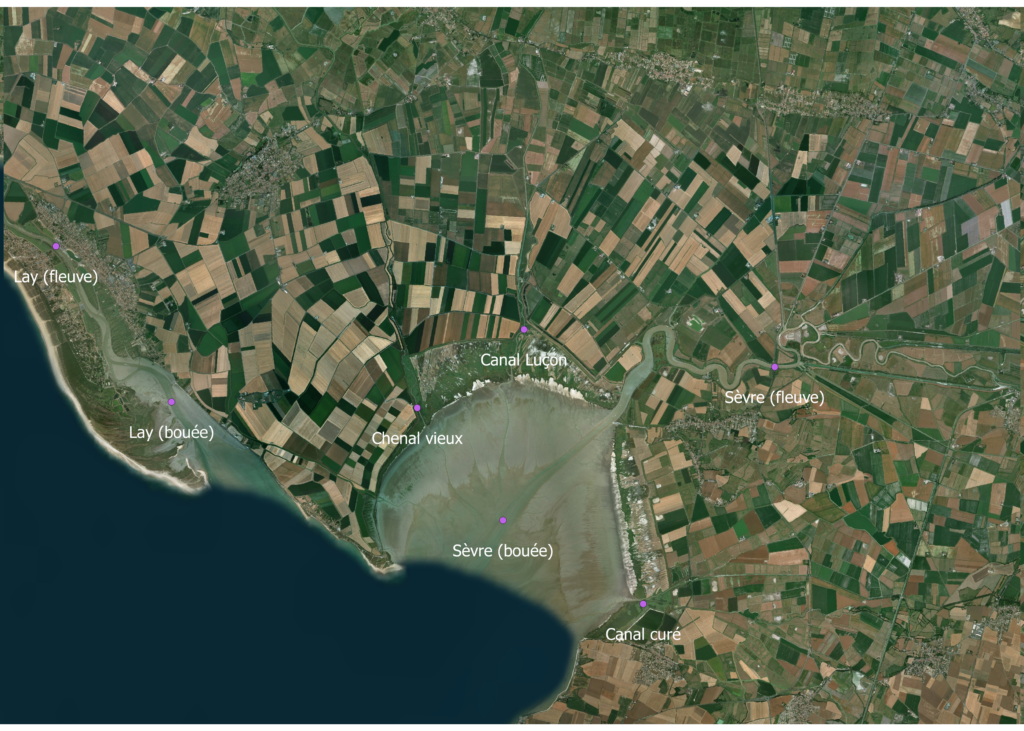 The locality of the STPS probes

The flow measurement probes were acquired and installed during March 2017 on the Lay and on the Sèvre Niortaise by the Marais Poitevin public authority. The results are being analysed.

In 2017 and 2018, hydrological measurements were made every 15 days at low tide at the five main outlets of the catchment area (Chenal Vieux, Canal de Luçon, Canal du Curé, Sèvre niortaise, and Lay) and at high tide at three coastal points (Sèvre and Lay buoys and associated sectors) by the “Laboratoire de l'environnement et de l'alimentation de la Vendée" (LEAV).

The results of this analysis are indicated in the report on the spatio-temporal variability of carbon and nutrient concentrations and fluxes over a temperate terrestrial-aquatic continuum, Variabilité spatio-temporelle des nutriments et du carbone et flux associés le long d’un continuum terrestre-aquatique tempéré written by IFREMER. 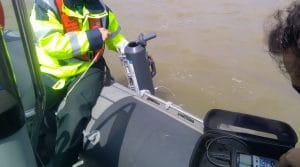 Water sampling by the LEAV