The Aiguillon Bay undergoes constant sediment deposition. As a result, the mudflat and salt marsh habitats are constantly evolving through time and in distribution. 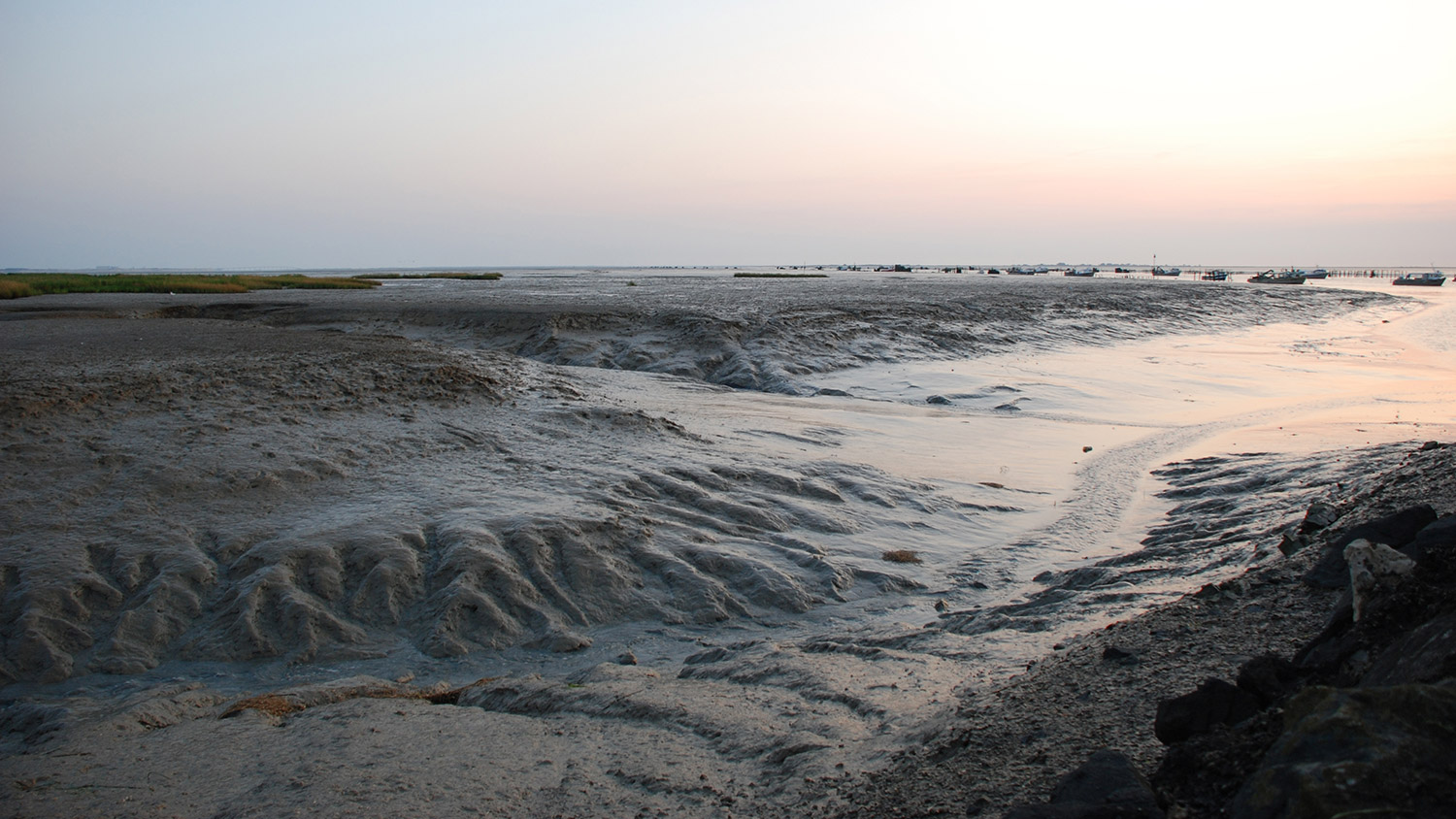 The mudflats of the « Port du Pavé” at Charron

The mudflats cover about 3,700 ha of the nature reserve. These are formations associated with the accumulation of fine sediments of marine and, to a lesser extent, fluvial origin. The existence of this habitat is therefore linked to a significant sedimentary input correlated with shallow water, important tides and their situation relatively sheltered from sea swell.

The Aiguillon Bay mudflats are called "intertidal", that is to say that they are located in the area between high and low tides.

These large expanses, which at first glance may appear empty, are in fact an important life sustaining habitat. Firstly, they support a micro-algal biofilm on the surface of nearly deposited sediments. This thin layer of a few tens of microns provides for much photosynthesis when it is uncovered and remains buried in the mud during high tide.

A closer examination of the mudflat reveals signs of life left by many animals present on and in the sediment. Mud snails Hydrobiidae, small gastropods the size of a large grain of rice with a shell shaped like a Chinese hat, graze the algal bio-film. There are also signs of the fauna that inhabit the sediment: Tellinidae bivalves, Scrobicularidae bivalves, cockles, the sand mason worm, bristle worms, etc ... which leave many traces of their presence on the mudflat’s surface.

It should be noted that mollusc species diversity is low in the Aiguillon Bay but that they are found in large quantities (Degré, 2006). These species assemblages, coupled with the particle size of the sediments, make it possible to characterize the different types of mudflats according to a European reference system (European Nature Information System). Thus, a study carried out by La Rochelle University made it possible to define the 8 bio-morphosedimentary habitats of the Aiguillon Bay (Bocher et al., 2011). The limits of these mudflat habitats are relatively well correlated with the frequency of marine submersion which is a function of tidal coefficients. 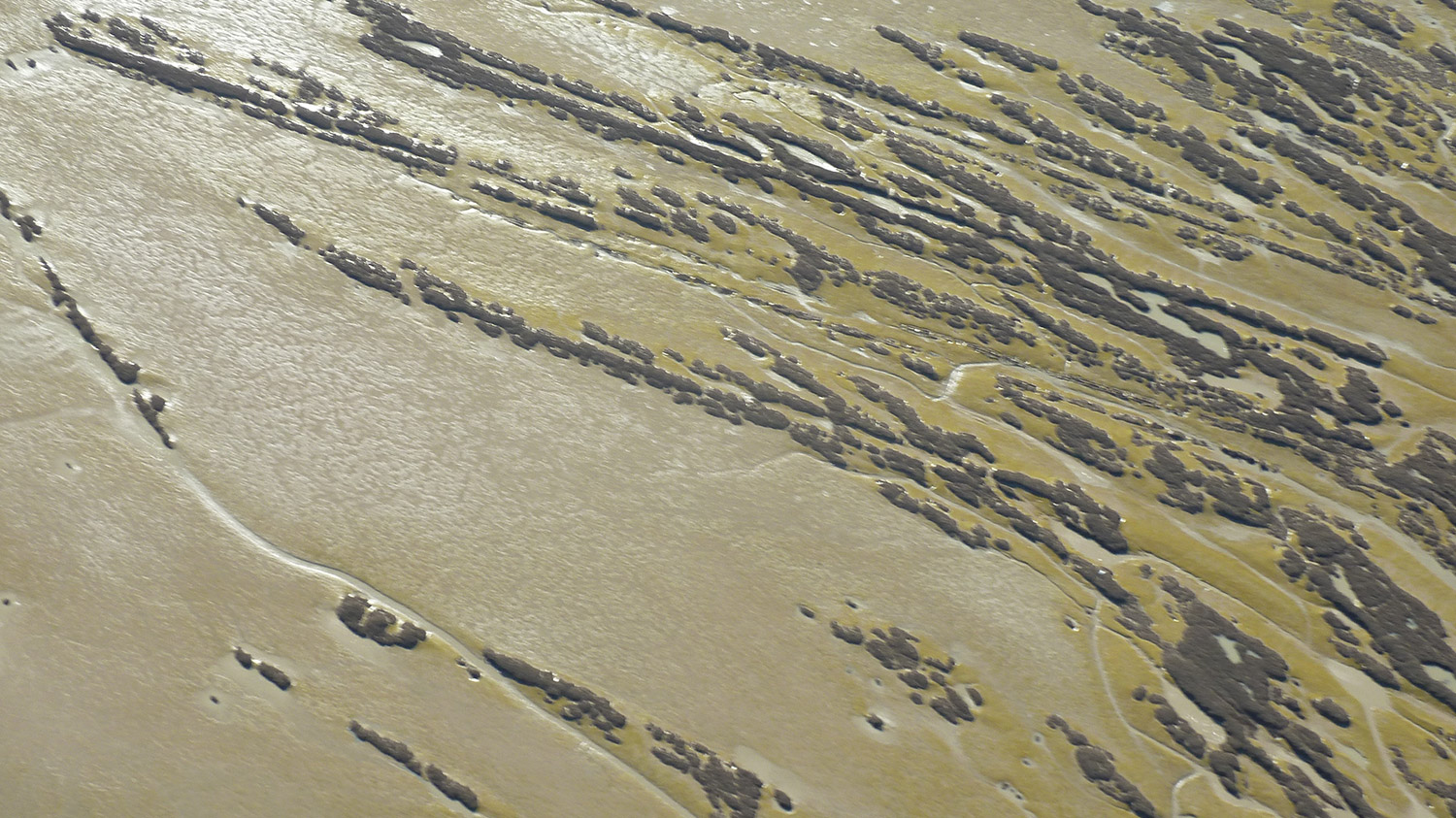 Aerial view of the mudflats 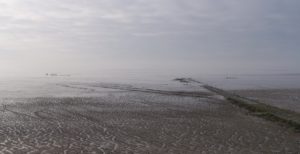 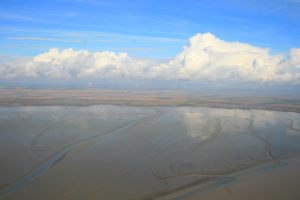 Salt marshes are areas of vegetation that are liable to flooding by salt water. They develop on the upper part of mudflats where sedimentary deposits are the most important, moreover accentuated by the installation of pioneer vegetation particularly cordgrass Spartina.

This type of vegetation covers an area of more than 1,100 ha in the Baie de l’Aiguillon or about 10% of the area of salt marshes in France, a lot less than in the Mont-Saint-Michel Bay with 4,000 ha! The increase in the area of salt marsh on the mudflats is indisputable (for example, an increase of 25 ha between 2005 and 2008) but this is heterogeneous and varies between different areas. The salt marshes are crossed by tidal channels, locally called “russons”, which participate in the natural flow of water.

The plants that develop there are termed halophytes because they have the particularity of being salt water tolerant. Their distribution is therefore associated with this tolerance: pioneer plants such as the cordgrass and samphire on the edge of mudflats and in the lower areas, the Sea-perslane in low but well drained areas, swaths of seaside alkaligrass on the middle and upper part of the salt marsh and the quackgrass on ridges on the sides of the tidal channels and on higher parts. 2 species of nationally protected species occur: 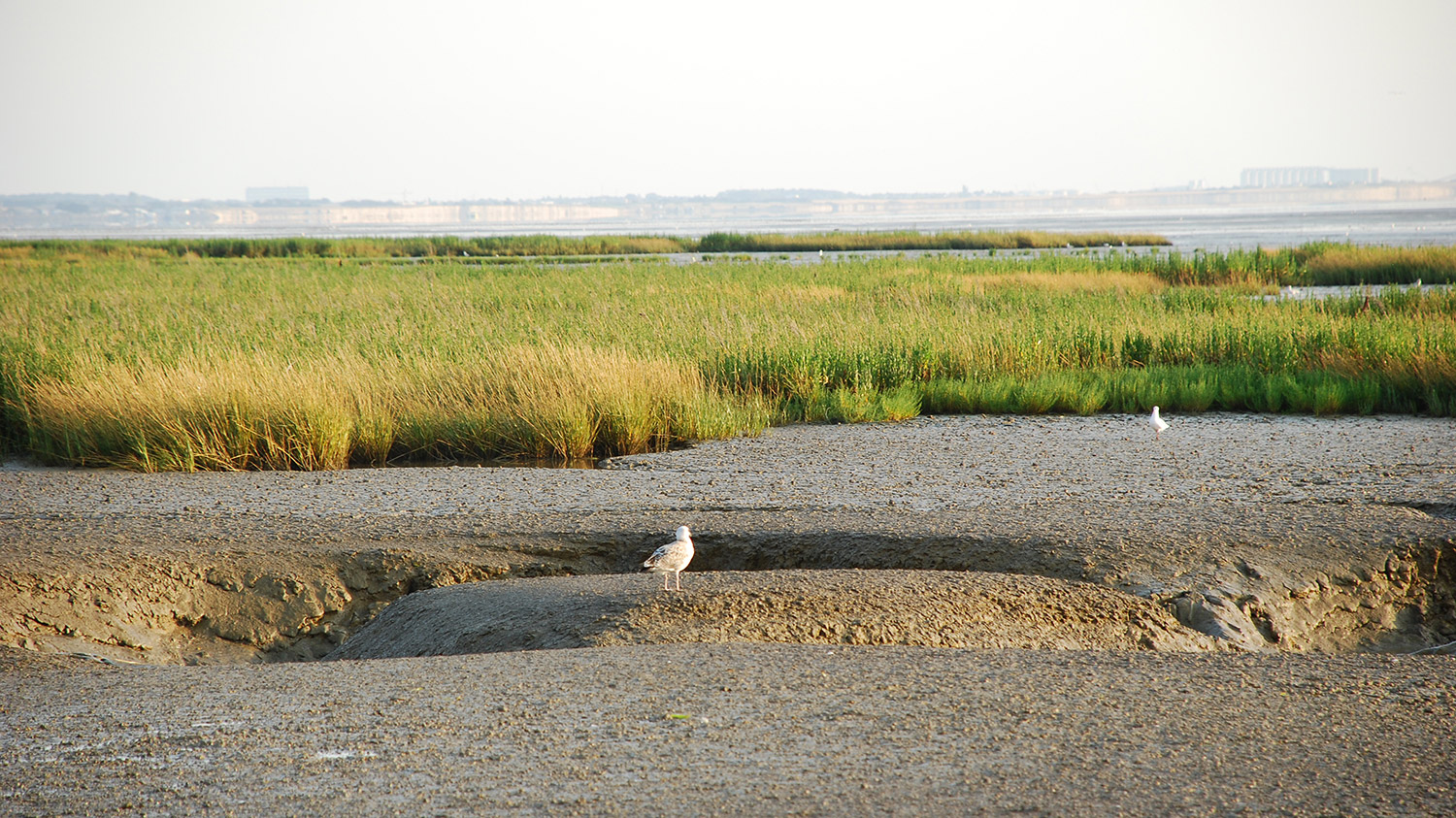 Salt marshes of the Aiguillon Bay 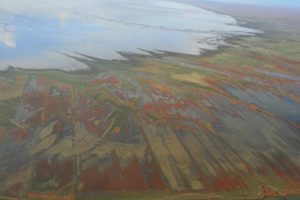 OTHER HABITATS ARE ALSO PRESENT BUT COVER MUCH SMALLER AREAS

The active sedimentation occurring in the Aiguillon Bay directly influences the evolution of habitats of European interest, the Atlantic dunes and salt marshes. In the conservation process, it is a question of accompanying the natural evolution of these habitats by limiting anthropogenic impacts.

This principle is important as it guarantees the proper functioning of the Aiguillon Bay, the quality of these habitats that have an essential heritage role on other ecological components. The conservation of salt marsh and mudflat habitats is a priority as it determines the attractiveness of the area for an important cortege of species.

These habitats are not only directly dependent on sedimentary dynamics but also on climate change. It would therefore be illusory to set habitat area objectives. The manager's action is therefore part of a strategy to support the natural dynamics of habitats in coherence with the traditional uses that are practiced and authorized. 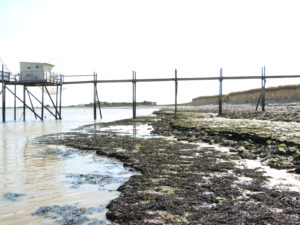