The Bay is well known for its birds, but not only…

The Aiguillon Bay owes its classification as a nature reserve to the large number of migratory wetland birds it attracts. But, it is of interest for many other often less known species. 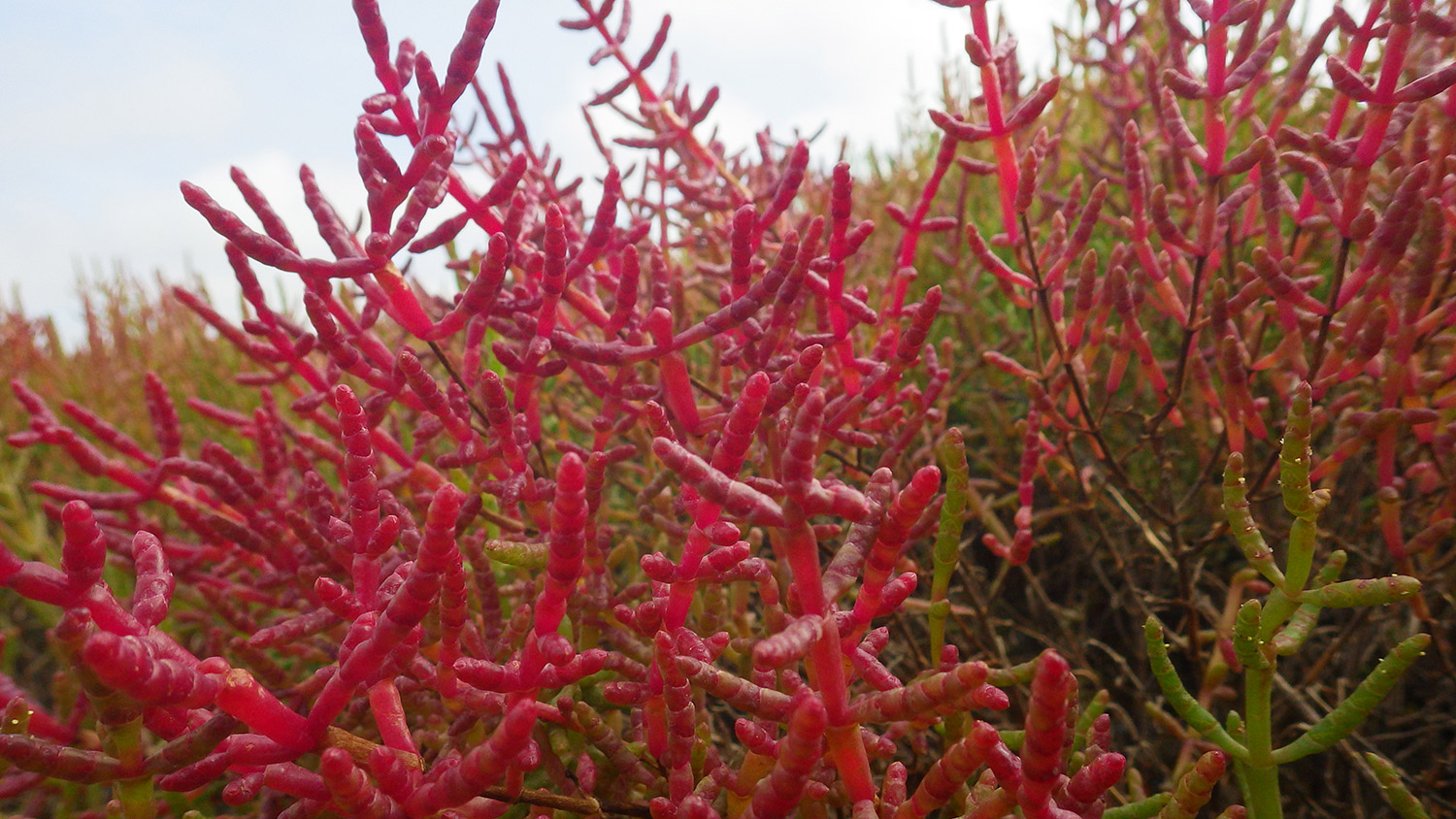 THE AIGUILLON BAY: A KNOWN AND RENOWN HOTEL AND RESTAURANT!

The classification of the Aiguillon Bay as National Nature Reserves comes from its exceptional ornithological interest. Indeed, the French coast represents a preferred sector of the East Atlantic flyway, the Aiguillon Bay is a site of prime importance for wetland birds, a direct reflection of the richness and quality of the environment. Birds find undisturbed areas and food. Thus, the area is of international importance for large numbers of waders and waterfowl either wintering or on a migratory stopover.

Waders are small ground-dwelling birds that frequent mainly coastal wetlands. They are typically highly migratory. Those encountered in the Aiguillon Bay come from areas of Greenland and Siberia (where they breed), on their way to the southern temperate and inter-tropical regions (where they spend the winter).

In January, about 45,000 waders are counted, of which the main species are:

The Aiguillon Bay is thus the most important wintering site in France for Black-tailed Godwit Limosa limosa and Avocet Recurvirostra avosetta and the second most important for Knot Calidris canutus . It also plays a key role during pre-breeding (spring) and post-breeding (autumn) migrations for other species: Knot Calidris canutus (Siberian sub-species), Ringed Plover Charadrius hiaticula and Redshank Tringa totanus.

At low tide, waders in search of food (molluscs and marine worms) disperse over all areas of the mudflats. On an incoming tide, the birds congregate on the remaining areas of available mudflats.

At high tide, during times of average coefficients, waders roost on salt marshes while at times of spring tides, the bay being submerged, they are forced to move to roosting sites outside the reserve (inland wetlands). 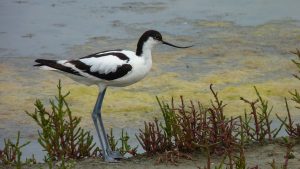 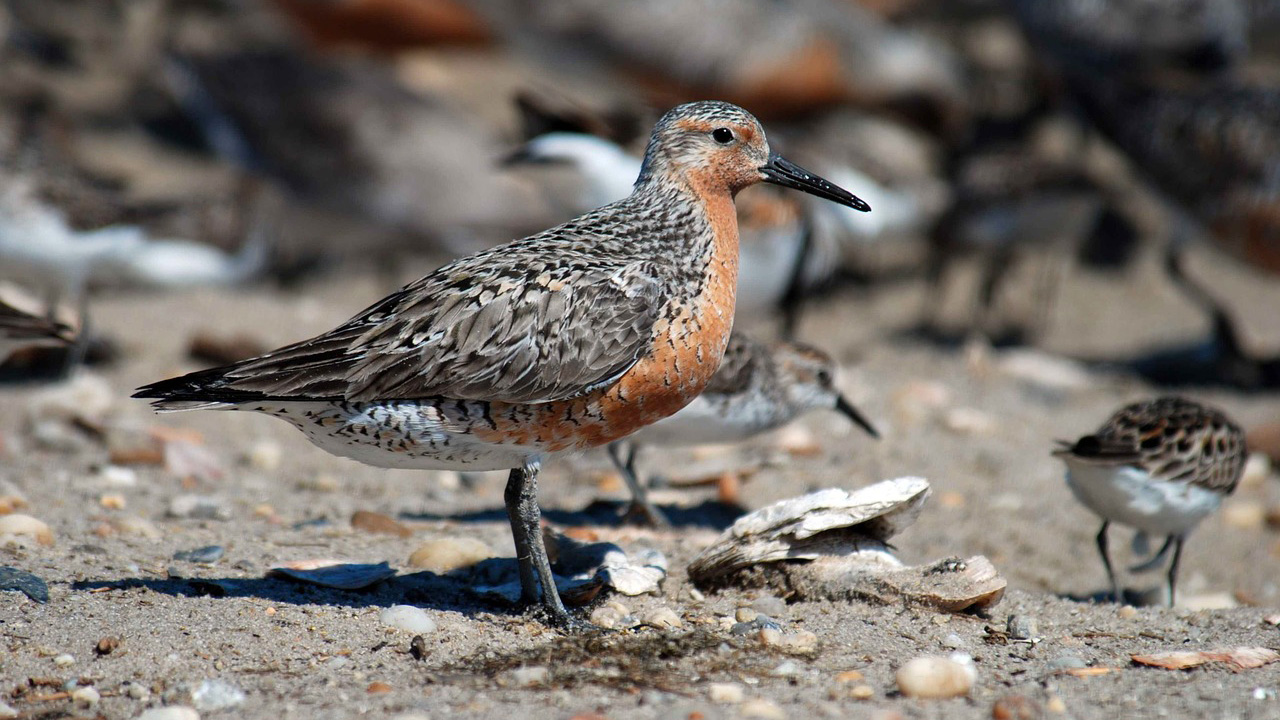 The family Anatidae includes ducks, geese and swans. These long-distance migrants also come to pass the winter in the bay, numbers on average varying between 25 and 35,000 birds.

Among them the geese (Greylag Anser anser, Brent Branta bernicula and a few White-fronted Anser albifrons and Barnacle geese Branta leucopsis), which occupy the reserve between October and March. They feed exclusively on the salt marshes, these herbivores feed here mainly on the Common Saltmarh-grass Puccinellia maritima.

There are also dabbling ducks (mainly Mallard, Pintail, Wigeon and Teal), present on the reserve for more than six months consecutively. During the day, they come to roost mainly on the mudflats, along the channels. In the evening, some of them go to feed on the salt marshes (especially Wigeon, herbivores) but many leave the bay to feed at night in the wet meadows in the Marais Poitevin. This rhythm of activity perfectly illustrates the complementarity and interdependence that exist between the Aiguillon Bay itself and the Marais Poitevin.

Finally, mention should be made of the Shelduck Tadorna tadorna, a coastal duck fond in particular of Hydrobies and which finds in the Aiguillon Bay a remarkably favourable site since it hosts up to 18,000 individuals in winter and of which some pairs breed in the bay. 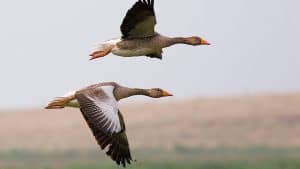 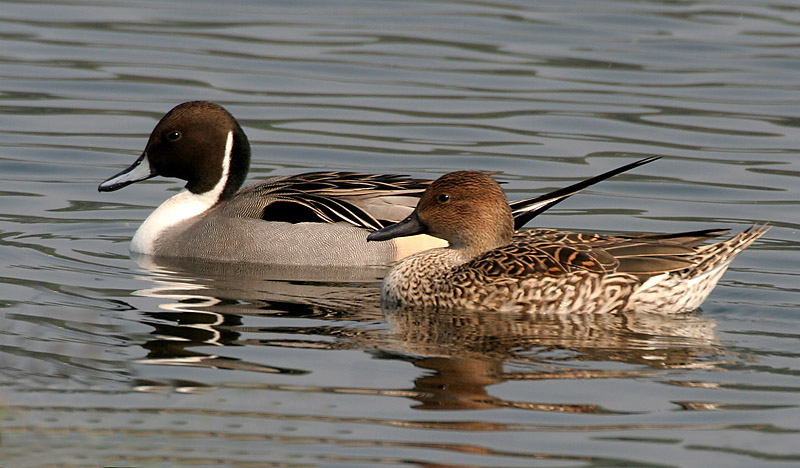 It might be supposed that outside times of migration the Aiguillon Bay is less interesting for birds but that is not so! Thereby, on salt marshes and dunes, several interesting species of birds find favourable conditions for breeding.

The White-spotted Bluethroat Luscinia svecica breeds mainly in areas with Marram grass, Annual Seablite or those with Hemlock and Black Mustard. The Skylark Alauda arvensis nests more in areas of Common Salt-marsh grass.

The Kentish Plover Calidrius alexandrinus, a small wader, nests at the top of the beaches at Pointe de l'Aiguillon. On the upper dune, other interesting species can be found such as the Tawny Pipit Anthus campestris, Crested Galerida cristata and Short-toed Lark Calandrella brachydactyla.

> View the photo gallery of the Birds of the Aiguillon Bay 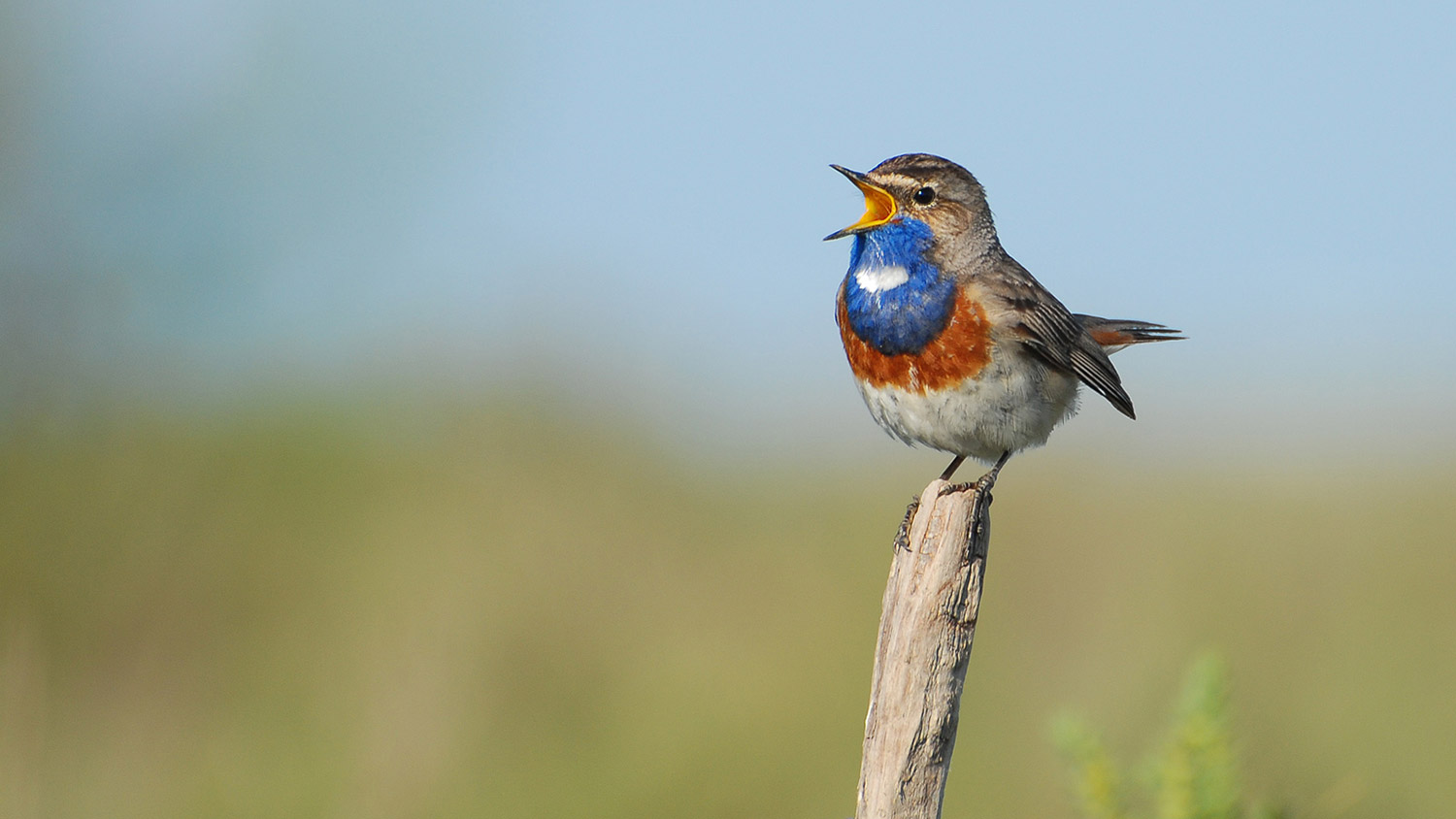 A FEW AMPHIBIANS VENTURE INTO THE AREA...

The Aiguillon Bay and its peripheral marshes is not necessarily an area known for its amphibians. The predominant species are Parsley Frog Pedodytes punctatus, Common Toad Bufo spinosus, Stripeless Tree Frog Hyla medidionalis and the Pool Frog Pelophylax lessonae. On the other hand, the restoration of peripheral habitats may well encourage their presence.

Thus, at Prée Mizottière, the management of water levels is likely to favour and increase amphibian populations. 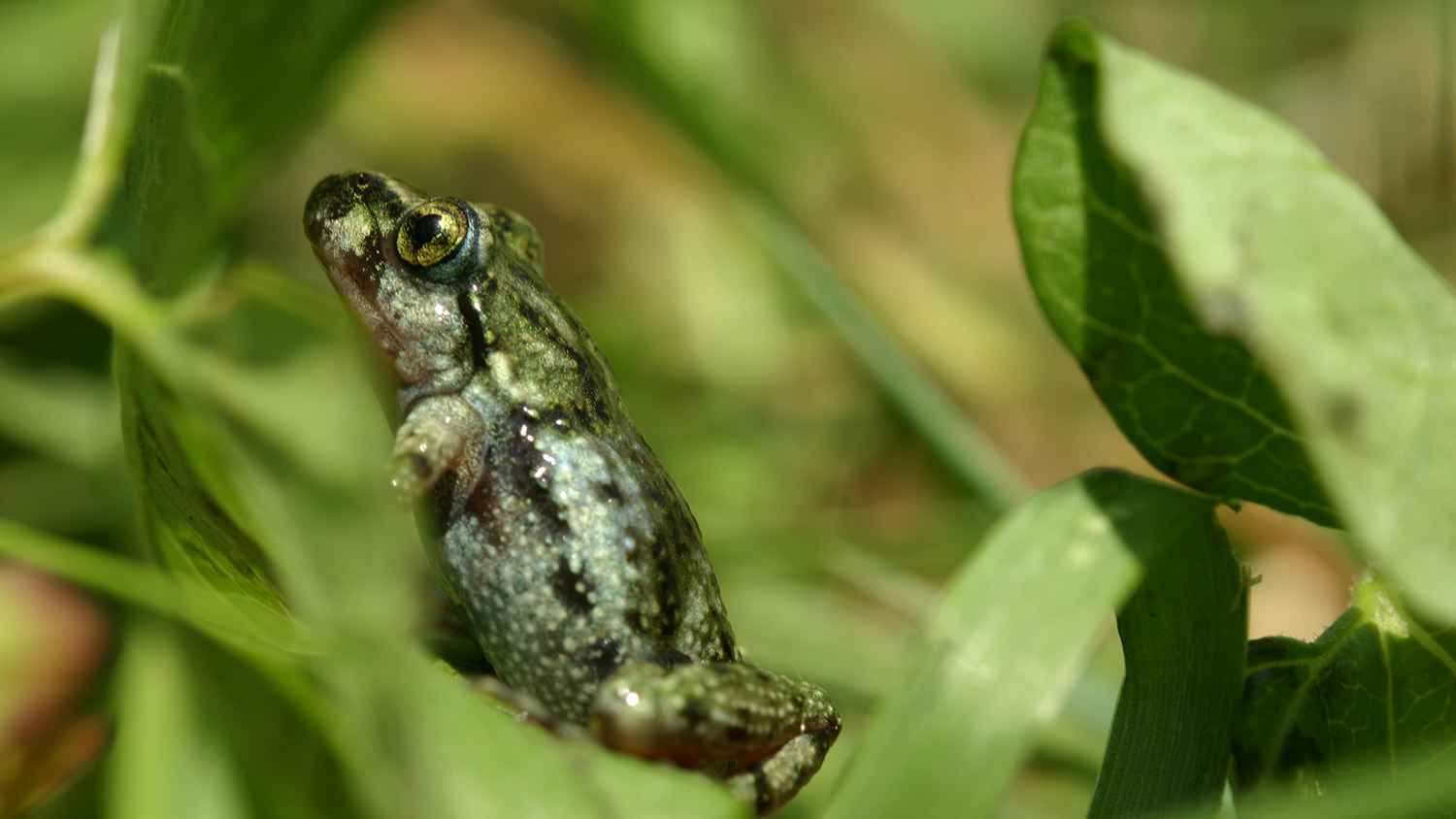 The vegetation of coastal environments consists mainly of halophyte species, that is to say, plants that inhabit and tolerate salty soils. The water supply to these plants is hindered by the presence of salt, so they draw up as little water as possible and need to economise it.

Currently, 112 plant species have been identified throughout the Aiguillon Bay Nature Reserve, including 69 on salt meadows and dunes.

Locally termed "mizotte", the salt marsh is covered by a dense carpet of vegetation characterized by a flora adapted to regular submersion by sea water, during tides of high coefficient.

This submersion that depends on the topography of the salt marsh, conditions the vegetation and its distribution by zone. Thus, generally it’s possible to categorize the salt marsh vegetation in the following way:

The predominance of Common Saltmarsh Grass Puccinellia maritima in the salt marshes on the nature reserve is the result of their management. Indeed, mowing and grazing promote and maintain a saltmarsh grass vegetation.

An invasive plant is also present on salt marshes: the Common Cordgrass Sporobolus anglicus. It is one of the 100 plant species designated by the IUCN as being the most dangerous for the environment. It is an invasive species, that is, introduced either voluntarily or not outside its area of natural distribution. The Common Cordgrass Sporobolus anglicus (originally Spartina anglica) is a very robust grass, resulting from a fertile hybrid between the Smooth Cordgrass S. alterniflora and Small Cordgrass S. maritima. Spartina alterniflora originates from North America and was accidentally introduced to Europe in Southampton (United Kingdom) in 1829. The first non-fertile hybrid S. x townsendii appeared in 1870 but was not recognized as such until 1956. It was soon replaced by S. anglica considered a species by Hubbard in 1968.

Its strong colonizing capacity is explained by the fact that it only takes one young plant per m² to quickly colonize an area (Reeder et al., 2004). The Common Cordgrass Spartina anglica was discovered in the Baie de l’Aiguillon in 1998 during the first mapping of salt marshes and has continued to progress since. In addition, different control methods have been tested and proved more or less effective, with significant impact on associated habitats. 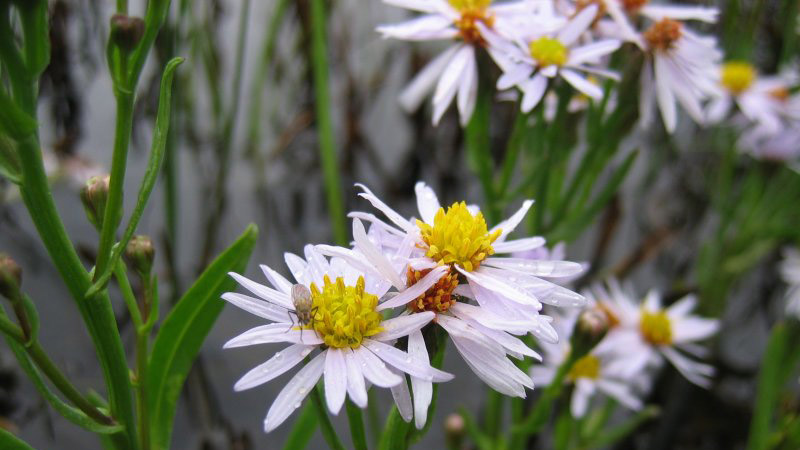 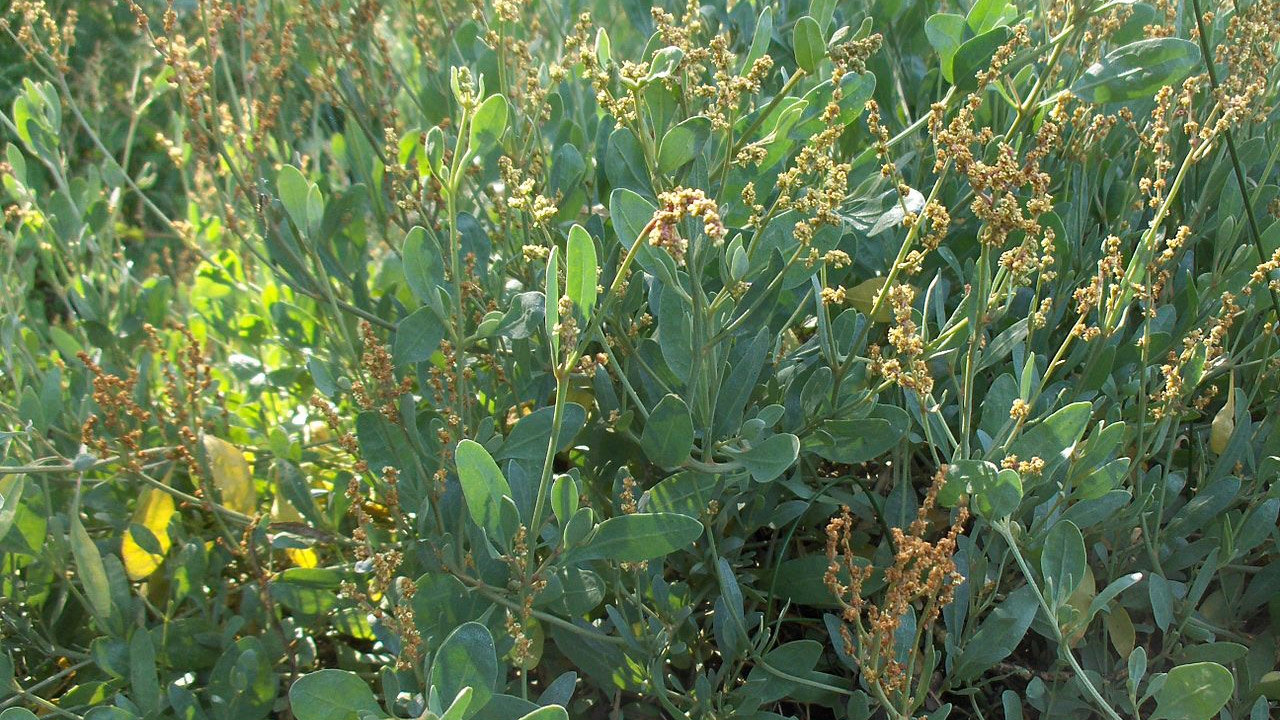 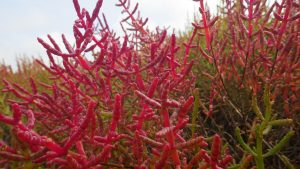 ON THE BANKS OF THE SÈVRE NIORTAISE RIVER

A typical salt marsh vegetation occurs but with the presence of additional species conditioned by the input of fresh water which testifies to a passage towards a brackish environment (where fresh and salt waters meet). As a result, we meet on the banks of the Sèvre reedbeds with phragmites, bulrushes or even areas dominated by the Saltmarsh Rush Juncus gerardii.

It’s worth paying particular attention to the endemic Water Dropwort Oenanthe foucaudii, found only in the Charente and Gironde estuaries, it is both a nationally protected species and is included in the Poitou-Charentes red list. It occurs on several sites on the reserve on muddy and vegetated banks subject to the tides’ swell of the Sèvre Niortaise river. 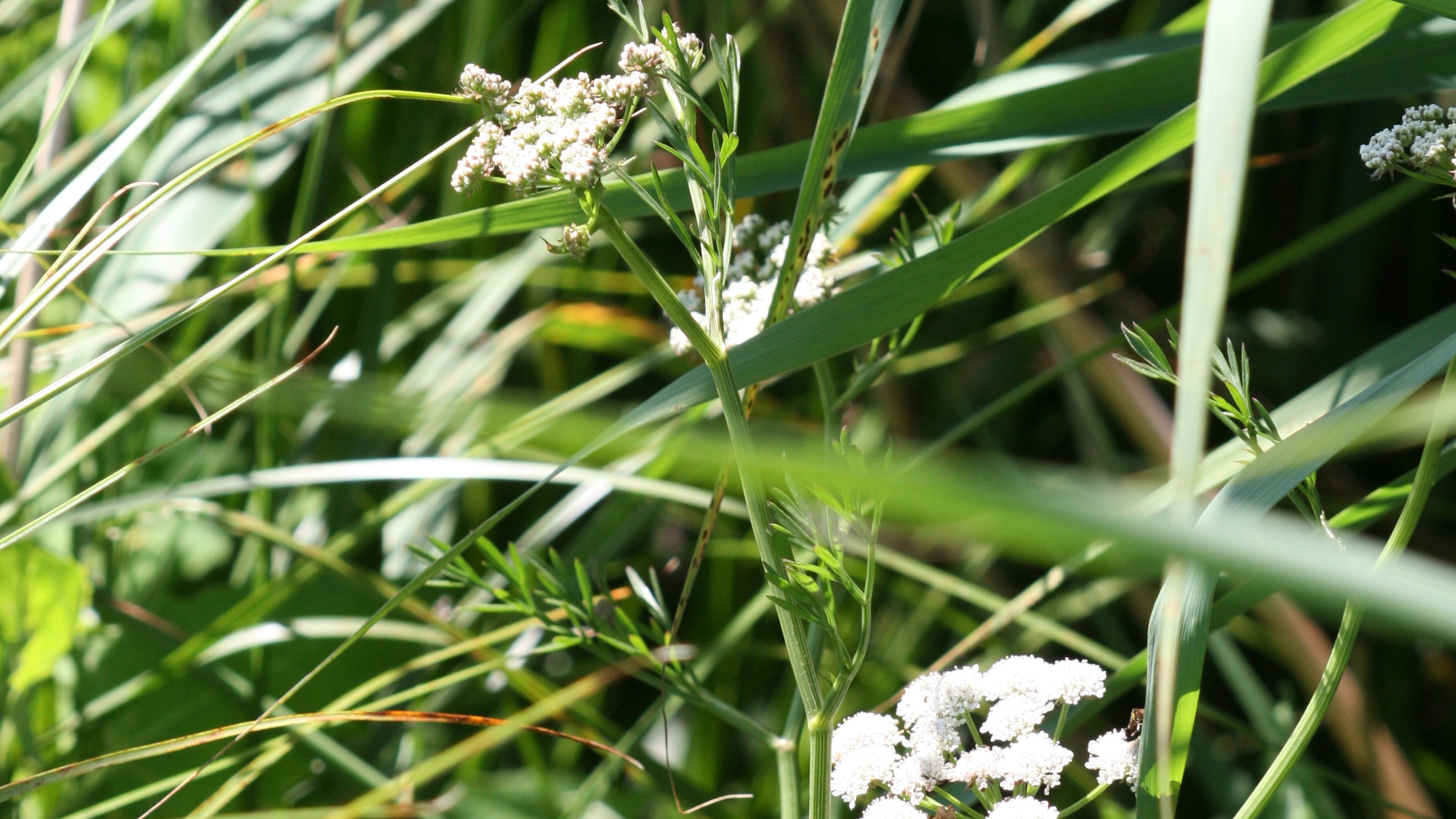 This vegetation shows similar adaptations as that of salt marshes. In the presence of salt, it responds by the development of succulent plants with leaves and sometimes stems that are fleshy. Such succulents are the Sea Rocket Cakile maritima thus found at the top of the beach or the Sea Bindweed Calystegia soldanella on the dunes.

Many species also have a very developed underground system of roots (these up to 2 to 3 meters), allowing a solid anchorage and a water supply, as in the Sea Spurge Euphorbia paralias or the Marram Ammophila arenaria. 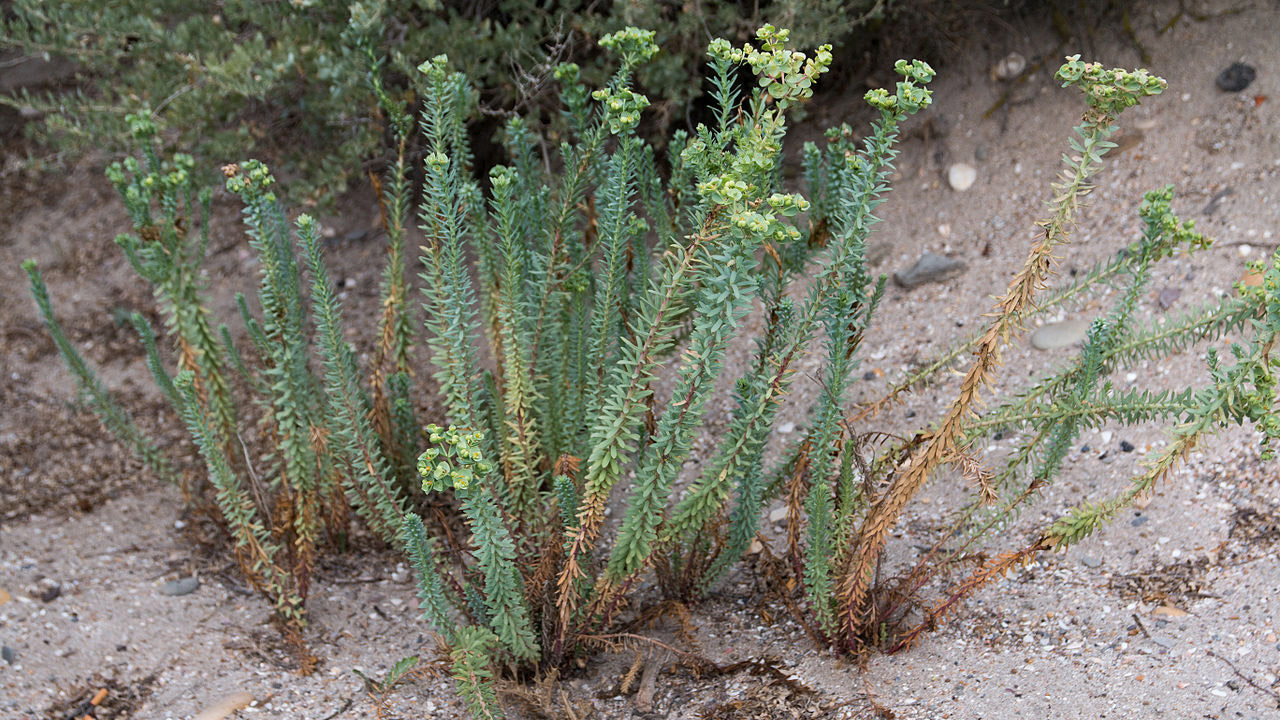 It forms the dunes of the Pointe de l’Aiguillon and allows for the appearance of Orchids, such as the very beautiful Bee Ophrys apifera and Spider Ophrys sphegoides Orchids.

> View the photo gallery of the flora of the Aiguillon Bay 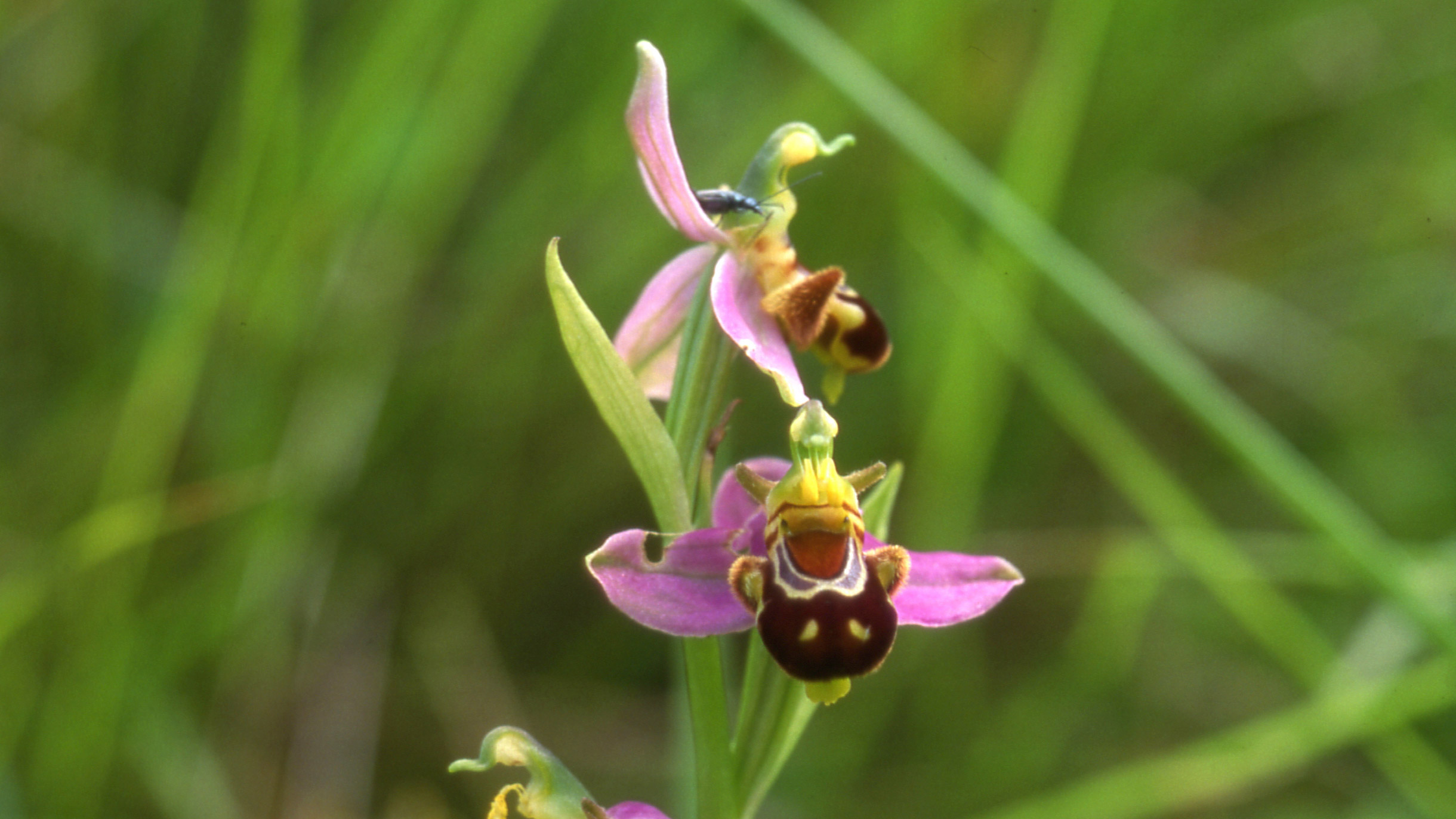